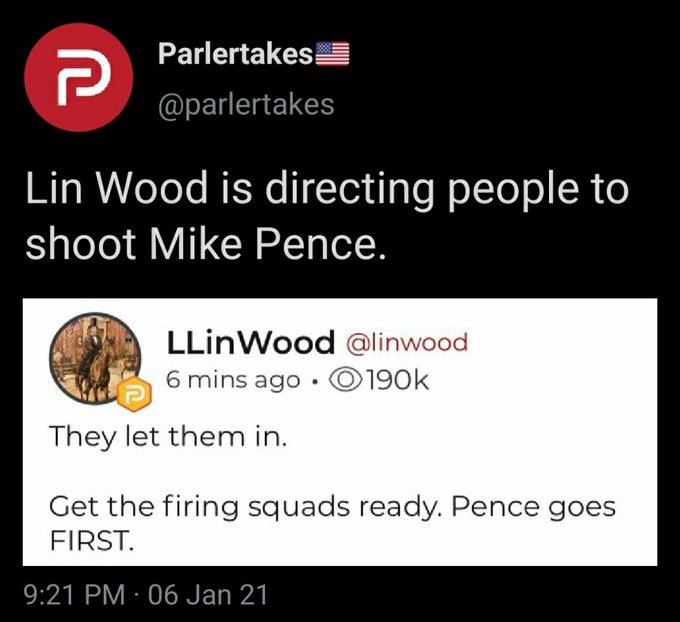 The impeachment managers drew a straight line from Trump to the insurrection and harm’s way for Mike Pence.

The march to the Capitol seemed spontaneous but had incitement and planning in a variety of forms. Surveillance recordings showed how close the potential assassinations were.

Senator Mike Lee said “Everyone makes mistakes; everyone is entitled to a mulligan”, somehow forgetting that Trump already has been impeached once.

Polls have a majority of Americans supporting impeachment.

Many of those in the mob had their sights on Pence — enraged that he had refused President Trump’s demand that he head off the electoral college count that formalized President-elect Joe Biden’s victory.

During the impeachment trial on Wednesday, Democrats demonstrated a powerful point: President Donald Trump knew Vice President Mike Pence was in danger during the January 6 assault on the Capitol and, rather than call off the murderous mob, Trump chose to attack Pence in a tweet and further incite the marauders against his own veep.

During his speech before the riot, Trump let it be known that he was counting on Pence to stop the electoral vote count scheduled for that day. But Pence released a statement that he would not do so, and the rioters at the Capitol cast Pence as an enemy. Pence and his family were rushed to a hiding place, as rioters inside the building searched for him. “Hang Pence,” some yelled.

In his presentation, Rep. Joaquin Castro (D-Texas), one of the House managers prosecuting the impeachment case, outlined a damning chronology. He noted the insurrectionists had turned on Pence by 2:15 p.m. that day and that their attempt to find Pence in the Capitol was being reported on television—which Trump was undoubtedly watching. But instead of urging his supporters to end the assault and protecting his vice president, Trump at 2:24 p.m. tweeted an attack on Pence. “Mike Pence didn’t have the courage to do what should have been done to protect our Country and our Constitution.” While his veep was fearing for his life, Trump put him in even greater jeopardy.

The message was received. Castro showed a video of one rioter reading Trump’s tweet to the crowd using a bullhorn.

We know Trump tweeted at 2:24pm that Pence “didn't have the courage” to overturn the election. What we don't know is if Trump's tweet came just before or just after Tuberville says he told him that Pence had been evacuated.— Kyle Cheney (@kyledcheney) February 11, 2021

Secret Service officers eventually spirited Pence to a room off the Senate floor with his wife and daughter after rioters began to pour into the Capitol, many loudly denouncing the vice president as a traitor as they marched through the first floor below the Senate chamber.

About one minute after Pence was hustled out of the chamber, a group charged up the stairs to a second-floor landing, chasing a Capitol Police officer who drew them away from the Senate.

Pence and his family had just ducked into a hideaway less than 100 feet from that landing, according to three people familiar with his whereabouts, who spoke on the condition of anonymity because of the sensitivity of the situation. If the pro-Trump mob had arrived seconds earlier, the attackers would have been in eyesight of the vice president as he was rushed across a reception hall into the office.

The proximity of the Jan. 6 mob to the vice president and the delay in evacuating him from the chamber — which have not been previously reported — raise questions about why the Secret Service did not move him earlier and underscore the jeopardy that top government leaders faced during the siege.

If Mike Pence had been assassinated during the riot, Trump would have declared martial law and suspended the transfer of power. This is the logic of a coup attempt, why Trump made no effort to save his Vice President.

As the terrifying impeachment video footage nows shows, the angry mob came incredibly close to Pence and his family— who, per the new time stamps, were hiding within feet of the mob for about 12-14 minutes. W/ @CarolLeonnig, @pkcapitol + @emmersbrown.https://t.co/pLpdUyaMCb

The very real threat Pence would have been killed is a much bigger deal. The “Football” contains neither launch codes nor “buttons” to directly fire any nuclear weapons. However, any compromise of its highly-classified contents would have been an unprecedented security breach.— Stephen Schwartz (@AtomicAnalyst) February 11, 2021

Trump obviously knew, almost certainly from multiple sources, but now we have a Republican senator on record saying that HE TOLD TRUMP. https://t.co/LnPaqqp1NI

critical point from someone who has lived in this world 👇 https://t.co/Nup2oKewNB

It’s always struck me as 100% deliberate that Trump made no plan for what the crowd was supposed to do when they got to the Capitol. There was no stage, no speeches, no instructions on what to do. So of course when they arrived, the mob did what Trump said and “fought like hell”.

Case closed: This was a MAGA murder mob out for Trump’s foes, writes @mtomasky https://t.co/bMyij6X6LC

You think your boss sucks?

Mike Pence once walked out of an NFL football game in his hometown despite having great seats because his boss asked him to and that boss STILL tried to have him killed.— Jason Kander (@JasonKander) February 11, 2021

The source told CNN the new video was “undeniably powerful.” When asked if Trump has any remorse, the source laughed and said that to Trump there's no greater offense than saying “sorry.”

Pence, who plans to keep laying low during the impeachment trial, has not quite patched up his relationship with Trump after what happened, according to a source familiar with the situation.
The source said Pence and Trump “discussed everything” that happened on January 6. But at the time, the source said, both men were more focused on just getting to January 20 — Inauguration Day.
“He got his point across at the meeting afterward,” the source said of Pence, noting there were some lingering hard feelings. Trump did not express remorse for putting Pence in a harrowing situation at the meeting, the source added.
www.cnn.com/…
x

GOP senators signal they plan to acquit Trump, including #KidHitler.

Before Hawley said he was going to object to the electors (based on lies and conspiracy theories), Leader McConnell thought no one in the Senate would object, so January 6 would be a non-event. Lots of GOPers on the Hill hold Hawley at least partly responsible for what happened. https://t.co/jjtNHNFM1T

New: One leading theory that investigators are considering in the death of Capitol police officer Sicknick is that the suspects sprayed an irritant, perhaps bear spray, that caused him to suffer a fatal reaction. https://t.co/QGCU5t4Nr8

Journalist @SandiBachom risked her safety to capture this footage. She has been repeatedly embedding with Pres. Trump's base for the past four years and saw the coup attempt coming. Watch her take on how it unfolded before her eyes. pic.twitter.com/AmPURE8lvt

“You're not the boss of me”
— Mark Twain