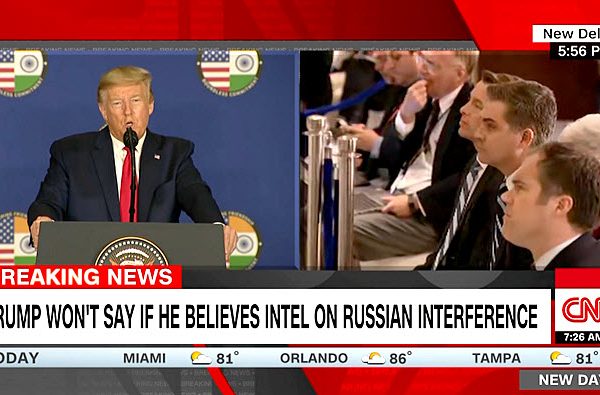 It was the same thing, Trump stands with the Russians and fails to acknowledge accountability for the revenge tour.

The fiery exchange saw Acosta tell Trump that CNN’s “record on delivering the truth is a lot better than yours sometimes, if you don’t mind me saying.”

The fiery exchange saw Acosta tell Trump that CNN’s “record on delivering the truth is a lot better than yours sometimes, if you don’t mind me saying.”

Trump ― who, according to The Washington Post has told more than 16,000 lies since taking office ― hit back, telling Acosta that “your record is so bad you ought to be ashamed of yourself.”

Acosta replied: “I’m not ashamed of anything and our organization is not ashamed, Sir.”

The exchange began when Acosta rose to ask Trump whether he would reject foreign help in his reelection and how he justifies the appointment of an acting director of national intelligence who has no relevant experience.
Trump began his answer by saying he wants no foreign election help, but then abruptly swerved into an attack on CNN.
www.huffpost.com/…
x

Freudian slip? trump repeats AcostaÃ¢Â€Â™s claim that Maguire was Ã¢Â€Âœpushed out,Ã¢Â€Â but then immediately corrects himself. Of course he was…— Diana Marie (@Shiloh_2005) February 25, 2020

From this day forward, February 25th shall forever be known as Ã¢Â€ÂœJim Acosta DayÃ¢Â€Â https://t.co/g6OMiV8vrw

During the same press conference, Trump lied about the number of people in the U.S. with coronavirus; strongly hinted at a call for violence against House Intelligence Committee Chair Adam Schiff; called on Justice Ruth Bader Ginsburg and Justice Sonia Sotomayor to recuse themselves from cases before the Supreme Court involving him; and said of maps of ISIS territory in 2017, “In fact, they had it painted a certain color. I won't tell you what color because it doesn't matter. Somebody will say it was a Republican color, so I don't want to get people confused. But it happened to be red.” Is it just me, or is Trump’s “I’m not going to tell you, here’s a hint, here’s the answer” speech pattern cropping up more often recently?

Watch this video of the Coronavirus breakout starting at day 19, compared to other pandemics of the last 20 years – and you'll see why the DOW tanked yesterday & is again today – cuz our liar & chief refuses to acknowledge how serious it is for fear it'll endanger his reelection. pic.twitter.com/n8x0Xpvulz— Paul Lidicul (@PaulLidicul) February 25, 2020

(51626)
$17.62 (as of May 21, 2022 05:02 GMT -04:00 - More infoProduct prices and availability are accurate as of the date/time indicated and are subject to change. Any price and availability information displayed on [relevant Amazon Site(s), as applicable] at the time of purchase will apply to the purchase of this product.)