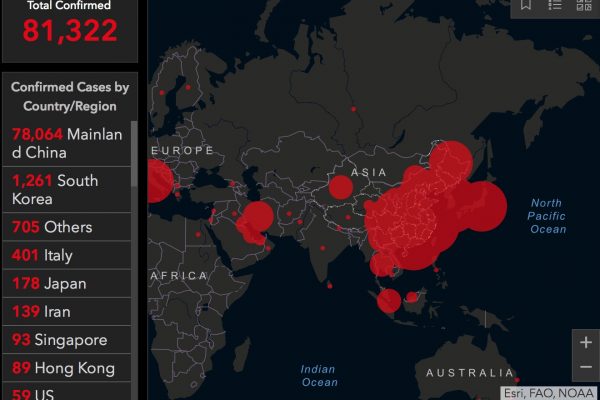 Trump’s Katrina is coming. The global economy will be making a downturn with the coronavirus COVID-19.

Trump just had another lie-filled presser claiming it will all get better and that there will soon be a vaccine (experts say 1-2 years away). Daniel Dale does another tweet thread.

Trump says he's just received another coronavirus briefing from a “talented” group. He says he made the correct decision on travel restrictions, even though this was “ridiculed” by some people.— Daniel Dale (@ddale8) February 26, 2020

The government's distinction here is between cases among people who've been repatriated to the US and cases in the US itself; Azar says it's 15 US-specific cases. Trump only talked about that group. https://t.co/PkMNIHeocgÃ¢Â€Â” Daniel Dale (@ddale8) February 26, 2020

Trump talked only about the first 15 US cases, calling them “the original 15” and repeatedly referring to them, even though the rest of the government now says there are 60 confirmed cases.— Daniel Dale (@ddale8) February 26, 2020

Trump: “If you count on the reports coming out of China, that spread has gone down quite a bit.” #facepalmÃ¢Â€Â” Josh Rogin (@joshrogin) February 26, 2020

Hey @CharlesMBlow
The real story is the woman's reaction behind Presisdent Trump (Sorry to I can't Identify who ever this is). Her reactions are priceless do that against fact Check @ddale8

In his counterfactual (https://t.co/Mfurqlx4OY), @ArthurCaplan imagines what would happen if an avian flu virus were to mutate and spread globally, and how a President Trump would respond.

NEW: A website connected to Steve Bannon and an exiled Chinese billionaire is pushing a conspiracy about the cremation of coronavirus victims in China https://t.co/IHfIh8Wp9c pic.twitter.com/8jGvy4Q07D— PolitiFact (@PolitiFact) February 27, 2020

In 2018, the Trump administration fired the governmentÃ¢Â€Â™s entire pandemic response chain of command, including the White House management infrastructure. In numerous phone calls and emails with key agencies across the U.S. government, the only consistent response encountered was

reducing $15 billion in national health spending and cutting the global disease-fighting operational budgets of the CDC, NSC, DHS, and HHS. And the governmentÃ¢Â€Â™s $30 million Complex Crises Fund was eliminated.

So the goal is to turn this into an HIV crisis? https://t.co/HCtvwbi7dd

Does anyone else think Trump made Pence responsible so Trump can blame him if/when things go wrong? Meanwhile, Nikki Haley is waiting in the wings. https://t.co/gWQ5VvT72X

The percentage of Americans who want a Democrat as president after 2020 instead of Donald Trump is now at its highest percentage of Trump's presidency. https://t.co/wx72mtScPB pic.twitter.com/NTfU2nRFN7

gosh what a stumper https://t.co/UHQEk72OHc

(8)
$19.99 (as of May 18, 2022 02:00 GMT -04:00 - More infoProduct prices and availability are accurate as of the date/time indicated and are subject to change. Any price and availability information displayed on [relevant Amazon Site(s), as applicable] at the time of purchase will apply to the purchase of this product.)