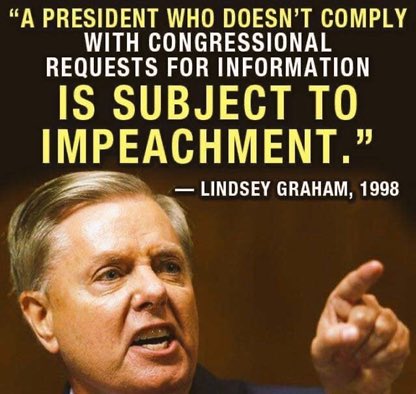 Trump continues to service Russia and support the “dirt on Biden” quest, whining that it doesn’t feel like he’s been impeached.

Because shaking down the Ukrainian president isn’t violating bribery and extortion statutes even if Congressional aid was worth $391 million in announcing investigations.

If only Zelensky had been found having sexy times like a golden shower in his office, perhaps that would have motivated him to make that announcement.

GOP Yesterday: You lied about cheating on your wife?! High crimes and misdemeanors!

GOP Today: You lied about using tax payer funds to go after your political rival with a foreign power?! Sham investigation!

Whether you agree with impeachment or not, Trump Derangement Syndrome has reached a new level.

House Democrats refusing to send the Articles of Impeachment to the Senate because they donÃ¢Â€Â™t like the way we may do the trial Ã¢Â€Â“ that is just scary.

No worries. Lindsey Graham's got this. He told Hannity that he's planning to call Schiff and the whistleblower in the Senate trial. Who knows? Maybe he'll call Monica Lewinsky too just to give it a little zing. I'm thinking Cato Kaelin could be fun too. https://t.co/MyFekLtXOG

Yeah Lindsey, what President Clinton and Monica Lewinsky did was a great real blow to National Security.

Let's Remember history @LindseyGrahamSC Linda Trip heard secondhand about Monika Lewinsky affair with President Clinton. She was basically a whistleblower! Congress launched investigation, during which Graham professed “Cleansing of the office” ” A crime need not be commited” pic.twitter.com/tlbB7MWGGQ

Graham warns Giuliani: “I hope you know what you're talking about” https://t.co/GSlrFk3Ej4 pic.twitter.com/Zpv1bRwFHF

Sen. Lindsey Graham (R-S.C.) warned on Wednesday that if Rudy Giuliani, President Trump's personal lawyer, is going to publicly suggest a “cover-up” involving the Bidens and Ukraine “then I hope you know what you're talking about.”

Graham’s comments come after Giuliani took a trip to Ukraine this month and met with a host of former and current officials as part of an effort to unearth more dirt on Trump's political rivals, including 2020 presidential candidate Joe Biden.

Trump’s efforts to get Kyiv to announce investigations into the Biden family and unfounded accusations that Ukraine interfered in the 2016 elections are at the center of Democrats’ impeachment efforts against him.

“I don't know what Rudy's got, but I'm going to send him a letter. If you're going to go on national television and tell the country that you've found evidence of a cover-up, then I hope you know what you're talking about,” Graham told reporters.

“I like Rudy a lot, but we're going to have to watch what we say,” he added.

Graham has invited Giuliani to testify before the Senate Judiciary Committee over his concerns about corruption in Ukraine. He reiterated on Wednesday that Trump’s lawyer has an “open invitation” before the panel he chairs.

NEW: The comparison of Jesus before Pontius Pilate and Trump's impeachment didnÃ¢Â€Â™t stand up well among experts in religion and law. https://t.co/ak7AMpnXn4

Once again: Ã¢Â€Â”>>> Trump administration is opposing bipartisan legislation to deter and punish Russian aggression and its interference in the 2016 election. A 22-page letter to Congress dated Tuesday calls the bill Ã¢Â€Âœunnecessary”.

(51625)
(as of May 21, 2022 06:40 GMT -04:00 - More infoProduct prices and availability are accurate as of the date/time indicated and are subject to change. Any price and availability information displayed on [relevant Amazon Site(s), as applicable] at the time of purchase will apply to the purchase of this product.)