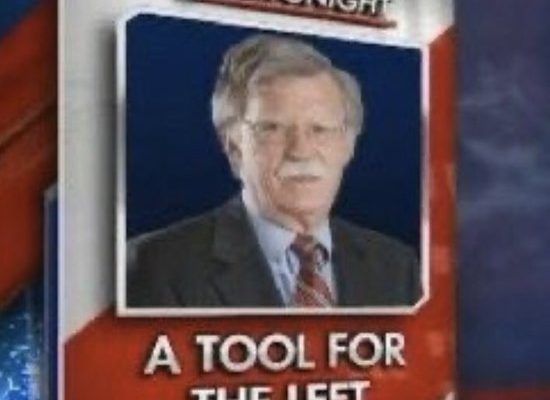 Doesn’t everyone in Trump-land know that John Bolton is an agent of the Deep State (sic), ready to bring on the Sixth International (sic). We just never see him at the membership meetings (or the BBQs).

….many more mistakes of judgement, gets fired because frankly, if I listened to him, we would be in World War Six by now, and goes out and IMMEDIATELY writes a nasty & untrue book. All Classified National Security. Who would do this?

An article in The Nation says we should be “grateful for those parts of the government whose inertia keeps the ship of state moving in the same general direction, regardless of who’s on the bridge at any given time.” Darn that Deep State bureaucracy needing to be smashed.

The real “deep state” is probably more like Rudy and the Shreks. Still, Lou Dobbs said, “John Bolton himself has been reduced to a tool for the radical Dims and the deep state with his, well, with his allegation that the President once told him the aid to Ukraine was entirely dependent on whether or not Mr. Zelensky carried out investigations of his political opponents.”

The headline drew little notice when it appeared last spring on a blog called “Disobedient Media.”

On Monday, the blog entry gained sudden popularity. That’s because its central claim — based only on innuendo and half-truths — proved useful to President Trump’s most fervent online supporters, who rushed to discredit the former United Nations ambassador and national security adviser as news broke that his forthcoming book would corroborate accounts that the president held up aid to Ukraine to advance investigations into his domestic political rivals.

The story quickly gained more than 5,000 interactions on Facebook — meaning shares, likes or other user actions — as it spread across pages and groups devoted to defending Trump. Soon, it became a building block of a campaign to discredit Bolton by impugning his motives and portraying him as a turncoat.

Anatomy of a Ã¢Â€Â˜smearÃ¢Â€Â™: How John Bolton became a target of the pro-Trump Internet, via @isaacstanbecker https://t.co/grqzppn9IY

Trump himself echoed some of the attacks Monday when he retweeted a post from Lou Dobbs of the Fox Business Network calling Bolton a “Rejected Neocon” and the “Deep State’s Last Desperate Act.”

That move, experts say, showcased how personal insults driven by online conspiracy theories — which Trump harnessed on his path to the presidency — remain fundamental to his hold on his base.

How is Bolton's book building the case for witnesses in the Senate trial?

Actually, the way to find the truth isnÃ¢Â€Â™t to have witnesses come and testify under oath, itÃ¢Â€Â™s to have TrumpÃ¢Â€Â™s Fox News bootlickers yell at them for an hour! (Ok, this one they may actually believe.) https://t.co/iDGAWoAJYb

Translation: Ã¢Â€ÂœIf we donÃ¢Â€Â™t railroad this acquittal through, they will find smoking gun after smoking gun of his guilt!Ã¢Â€Â https://t.co/oYtLy8irU8

CNN's @DonLemon: “Senators are working overtime to come up with reasons for not calling Bolton to testify.” https://t.co/K0lnB4vpev pic.twitter.com/paIM8fjdPF

Trump probably wants you to join the right socialists in the GOP, not those “radical rage-filled left socialists”.

“Americans of all political beliefs are sick and tired of the radical rage-filled left socialists… Voters are making a mass exodus from that party and we are welcoming them to the Republican Party with wide open arms.” — Donald Trump

WHY do they still let him speak in public? This is elder abuse. You can even hear someone from FOX News giggling at him before they cut away. Holy shit. https://t.co/ad8T4NZFB1

Hannity Challenges Bolton To Speak Out On His Show: “You Have Something To Say, John? Come Here”https://t.co/plBUNFg32O

Trump supporters, if there was ever direct evidence Trump doesnÃ¢Â€Â™t care about you, this is it. You will die if you drink bleach. Even cutting it is dangerous. Believe me, IÃ¢Â€Â™m your real friend. #GOPsucks https://t.co/R81JFQvjB0