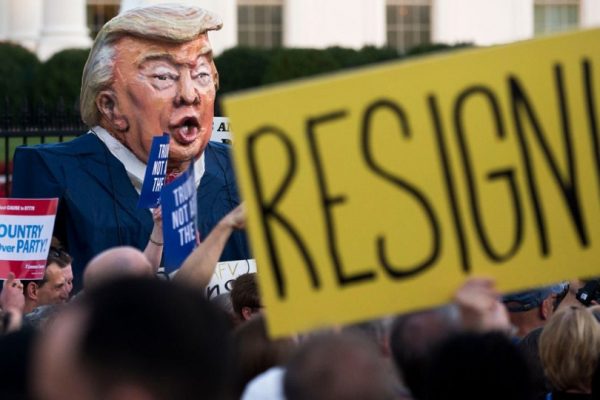 Donald Trump is unfit in almost every respect for the high office he holds. But what distinguishes him from every other bad leader the U.S. has had is that he has repeatedly, egregiously, betrayed his country. Regardless of what Congress decides he’s done, the facts available to the public show that Trump has met every necessary standard to define his behavior as traitorous.

He has clearly broken faith with the people of the country he was chosen to lead, starting long before he took office, then throughout his time in the White House. And we may not yet have seen the last of his crimes. But the story we know so far is so outrageous and disturbing that it raises a question that has never before been presented in American history: is the president of the United States the greatest threat this country faces in the world?

During his 2016 presidential run, the revelation of the Access Hollywood tape and subsequent allegations of sexual misconduct lodged against Donald Trump looked like they might doom his candidacy. Trump survived, and the first two years of the real estate scion’s presidency were marked not by controversy over his behavior around women but by the Mueller investigation.

So far, Trump has dodged the #MeToo bullet that has taken down so many once-powerful men. But despite the decades of tabloid fascination with his personal life, the story of Trump’s relationship with women has never been fully told. Considering his bully pulpit in the White House, the reckoning is overdue.

All the President’s Women offers the most detailed account yet of Trump’s history with women, dating back to his childhood and high school days through his rise in real estate, reality TV, and politics. This book will show that Trump’s behavior goes far beyond occasional “locker-room talk” and unwanted advances.

Barry Levine and Monique El-Faizy detail more than a dozen new allegations against Trump, including a disturbing attack on a woman at Mar-a-Lago, an incident at a private Manhattan sex club involving a teenage girl, as well as Trump’s behavior at fashion shows and beauty pageants–events that gave the future president a hunting ground to harass young women.

Veteran journalists Levine and El-Faizy tell the story of Trump from the point of view of the women in his orbit–wives, mistresses, playmates, and those whom the president has dated, kissed, groped, or lusted after.

As Joe Scarborough and “Morning Joe” co-host Mika Brzezinski observed Donald Trump’s political rise in 2016, they found themselves uttering the same line to each other: “This ends badly.”

But it wasn’t always that way. During their first meeting in 2003, Scarborough was amused by Trump’s swagger and bigger-than-life persona. He and Brzezinski found him engaging and generous, if terribly insecure, and Trump made entertaining appearances on the MSNBC hosts’ show.

But as Trump became an unstoppable political force toward the end of 2015, with his giant rallies and rambling speeches laced with bigotry, Scarborough saw his friend in a disturbing new light. He attacked Trump on TV and in his Washington Post column, becoming one of the most prominent conservative voices to speak out, even as the anxious candidate continued calling him to vent and ask for advice. As Trump’s new presidency sputtered, the relationship again ruptured, culminating in the president’s ugly and infamous Twitter attack against Brzezinski in June 2017.
This Ends Badly will finally reveal the full story of Scarborough’s falling out with Donald Trump and how Scarborough came to fear his old friend inflicting permanent damage on the presidency. The ultimate political insider, Scarborough’s must-read account is propelled by insights and revelations from his private conversations with the president, as well as figures like Jared Kushner, Mike Pompeo, John McCain, Paul Ryan, and many more.

The official account for The Politicus. Sharing news we find interesting.

(51660)
$17.62 (as of May 21, 2022 21:47 GMT -04:00 - More infoProduct prices and availability are accurate as of the date/time indicated and are subject to change. Any price and availability information displayed on [relevant Amazon Site(s), as applicable] at the time of purchase will apply to the purchase of this product.)