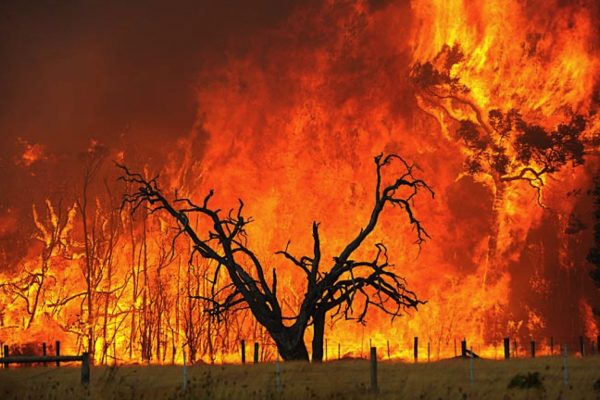 Perhaps it is time that the world helps Australia in their moment of need. It is like Armageddon in many areas of the continent.

Yesterday, over 30,000 people were ordered to evacuate a huge swath of land in Victoria state, known as Gippsland, as soaring temperatures sparked lightening creating apocalyptic wildfires.

Today, thousands are trapped on a beach in the town of Mallacoota as a massive firewall of over 65 feet bears down on them.

Thousands of people fled to the lake and ocean in Mallacoota, as bushfires hit the Gippsland town on Tuesday.

The out-of-control fire reached the town in the morning and about 4,000 people fled to the coastline, with Country Fire Authority members working to protect them. The town had not been told to evacuate on Sunday when the rest of East Gippsland was, and authorities decided it was too dangerous to move them on Monday.

People reported hearing gas bottles explode as the fire front reached the town, and the sound of sirens telling people to get in the water.

By 1.30pm the fire had reached the water’s edge. A local man, Graham, told ABC Gippsland he could see fire in the centre of the town, and 20m high flames on the outskirts where he believed homes were alight.

A couple of the videos contain strong language.

‘F**k I’ve never seen anything like it,’ this man has described the scenes in Mallacoota, Victoria after he was forced to escape a huge bushfire by boat. pic.twitter.com/sZuZkZEnaa

The zoo is in the direct path of an out-of-control bushfire. #NSWFires
https://t.co/QtyFQWgPAD

It was pitch black at 9.30am in #Mallacoota as more than 4,000 people fled #AustralianFires, seeking shelter on the beach as they heard gas bottles exploding and sirens telling them to get in the water https://t.co/ac9BEX76yA#AustralianBushfires #AustraliaBurns #bushfirecrisis pic.twitter.com/AUBN9Uh02a

Gas bottles float in the river at Mallacoota yesterday after campers were reputedly told to put them in the water as fire approached. Picture: Supplied

Can you imagine how terrified people must be? pic.twitter.com/VlUHToqjtR

"A worrying situation is also unfolding in #Corryong near the Victoria-NSW border.
The town has been hit by a fire at around 12.45pm and all mobile and radio reception, and power is currently down…"#bushfirecrisis #Victoriabushfires#vicfires #NSWfires#Bushfires #bushfiresVIC pic.twitter.com/cymVBfLJWm

Katherine Murphy writes a blistering piece on the Coalition and Scott Morrison, This is what it looks like when your government sells out the climate for votes

Given there is no law that says bushfires preclude sensible, evidence-based policy conversations, it’s reasonable to ask why this particular prohibition was asserted.

The answer to that is simple. The Coalition does not want its record raked over at a time when Australians are deeply anxious, because it’s hard to control the narrative in those conditions. The government does not want people who are not particularly engaged in politics, and who make a point of not following Canberra’s periodically rancid policy debates (and climate is the most toxic of the lot), switching on to this issue at a time where they have a personal stake in the conversation.

While Scott Morrison has acknowledged there is a link between climate change and natural disasters, and in attitudinal terms that acknowledgement is a positive development, it’s not really in the prime minister’s interests for anyone to press very assertively on that pressure point, particularly not at a time when the prolonged drought (another symptom of climate change) is already making the Coalition’s supporters restive.

Morrison doesn’t invite the climate action interrogation, because the government’s record is abysmal, and I don’t invoke that word lightly. The Liberal and National parties have done everything within their collective power to frustrate climate action in Australia for more than a decade. The Coalition repealed the carbon price. They attempted to gut the renewable energy target. They imposed fig-leaf policies costing taxpayers billions that have failed to stop emissions rising every quarter.

Heartbreaking footage of kangaroos fleeing has been captured in Monaro, NSW, as bushfires close in.

Sorry for the short diary, but I need to get some sleep.

(33003)
(as of May 19, 2022 05:48 GMT -04:00 - More infoProduct prices and availability are accurate as of the date/time indicated and are subject to change. Any price and availability information displayed on [relevant Amazon Site(s), as applicable] at the time of purchase will apply to the purchase of this product.)