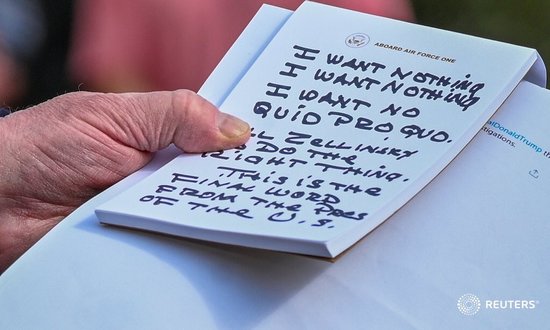 More Trump lies and disinformation. Remember that Trump did his little recitation stunt on the South Lawn during chopper talk to draw attention away from the testimony of the July 26 French restaurant phone call in Kyiv.

There’s no evidence Trump’s September 9 ‘no quid pro quo’ conversation with Sondland ever happened — and that could prove far worse for @realDonaldTrump https://t.co/jj9Z1HCKBS

Questioned by members of the House Intelligence Committee, Sondland (U.S. ambassador to the European Union) testified that he spoke to Trump on September 9, 2019. According to Sondland, “it was a very short, abrupt conversation. He was not in a good mood. And he just said, ‘I want nothing. I want nothing. I want no quid pro quo. Tell Zelensky to do the right thing.’”

Sondland may have to “amend” his testimony again. https://t.co/BLW8IIb23d

Trump's argument: Sondland notes that I told him on September 9 that I didn't want anything from Ukraine and that there was no quid pro quo. Therefore, the question of impeachment is now dead. pic.twitter.com/Z0lDVGYToO