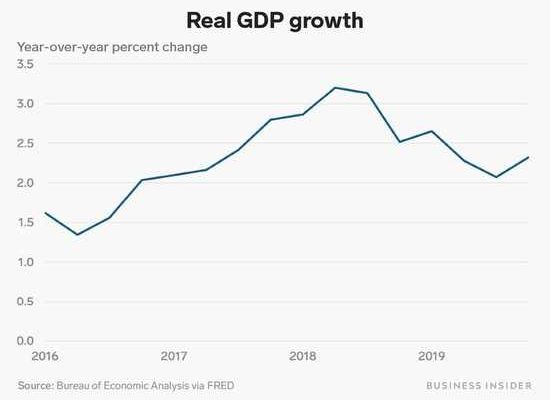 Trump may have been squandering Obama’s strong economy.

(2018) “The benefits of this strong economy and sound financial system have not reached all Americans.”

Economists call them leading economic indicators because they measure the early influencers on growth. In October 2019, they report that the economy is faltering slightly. It has slightly slower growth, low unemployment, and inflation is below target.

Jan 7, 2020: Investors should not assume that President Donald Trump will stay in the White House just because of the strong U.S. economy, according to an analysis from Morgan Stanley.

Zezas said Trump is missing something that those past good-economy incumbent presidents had: Stronger job approval than disapproval. “All of those that had good economies also had net positive approval rating.”

That makes Trump a standout.

“Now we have a president with a good economy who’s never had a net positive approval rating,” Zezas added, referring to the difference between the approval and disapproval ratings.

Trump’s approval rating hovers around 45%, according to a data compilation from RealClearPolitics, with disapproval at more than 52%. That translates into a net negative spread of about 7%.

Trump is about mediocrity, which is why there’s a greater danger of a recession. Trump touting the stock market is about gaslighting and ignoring the pattern of volatility. And then there's that massive deficit and all those deadly moves in defense and the environment, aside from Trump failing to develop underlying US productive capacity. Trump continues to coast on a strong Obama economy while risking it all for future generations on irrelevant trade policy with dimwitted staff.

Federal Reserve officials and most mainstream economists expect economic growth to hew closer to 2 percent. There are no signs the economy is capable of delivering a phenomenal and rarely achieved growth rate on the order of 6 percent.

U.S. economic growth is now slowest since 2016, despite the tax cuts. 13 million workers need more than 1 job, according to the Census.

A better metric to use than the GDP growth rate that is reported each quarter is the change year over year. The main reason is that quarterly results take the quarter-to-quarter change and multiples it by four. This means that any component having a stronger or weaker result in a quarter can create a yearly number that is not a good indicator of the real economy.

The US Commerce Department announced a GDP growth rate of 2.3% in 2019. A strong domestic economy was dampened by the US-China trade dispute and slowing global economy. Furthermore, the Federal Reserve left rates unchanged. #economicgrowth https://t.co/Z70HWG1vZ0 pic.twitter.com/HxwsaXN2cj

U.S. economic growth is now slowest since 2016, despite the tax cuts.

When I started covering money in politics, I had a hard time understanding what it meant for someone to donate $100 million. So I calculated it over their net worth, then applied it to my savings, just to comprehend.

Please send this video to every undecided voter you know. pic.twitter.com/p4AShY04rA

Trump will make idiotic economic claims during the SOTU, and he will be full of crap.