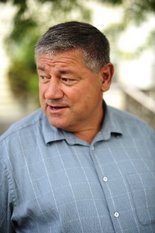 Being a resident of Bay City State Rep. Brunner knows first hand about Ingersoll's felony fraud charges pending a December 2 trial. He also knows about all of the problems with Bay City Academy's high staff turnover, including Superintendent/Principal Ryan Shrock. Mr. Brunner will also know all about Ingersoll's attempt to transform several properties in Bay City into a “front porch” community and businesses, but couldn't be bothered to pay the city the property taxes he owed as he stole money from a loan earmarked to remodel the church building that would become Bay City Academy, and instead transferred the money in his personal bank account.

Other issues surrounding Dr. Ingersoll include his former flagship for-profit charter school, Grand Traverse Academy, which fired Smart Schools in the spring of 2014 after his indictment. His Integrated Visual Learning business partner, Dr. Mark Noss, formed Full Spectrum LLC to take over as management company for GTA, while Dr. Noss's son in law, Brian Lynch, took over as Superintendent of Bay City Academy. GTA is struggling now to distance themselves from Steve Ingersoll despite his business partner managing the school, and figuring out how to recoup the millions of dollars Dr. Ingersoll took from GTA as advance payments to himself, which may or may not have been used for legal fees a year ago.

Grand Traverse Academy and Bay City Academy both use Integrated Visual Learning, which according to Dr. Ingersoll and Dr. Noss is the only real way to teach children how to learn. According to them, it cures 90% of children with ADD/ADHD and is the only Special Education services any child with any learning disability ever needs.

Dr. Steve Ingersoll couldn't be a better choice to hold up to Michigan tax payers as the reason why the state needs to stop authorizing more for-profit charter schools. Thank you, Charles Brunner, for making this eye doctor/snake oil salesman turned school entrepreneur your poster child for what school choice really means in Michigan.

(22167)
$179.00 (as of May 15, 2022 12:34 GMT -04:00 - More infoProduct prices and availability are accurate as of the date/time indicated and are subject to change. Any price and availability information displayed on [relevant Amazon Site(s), as applicable] at the time of purchase will apply to the purchase of this product.)