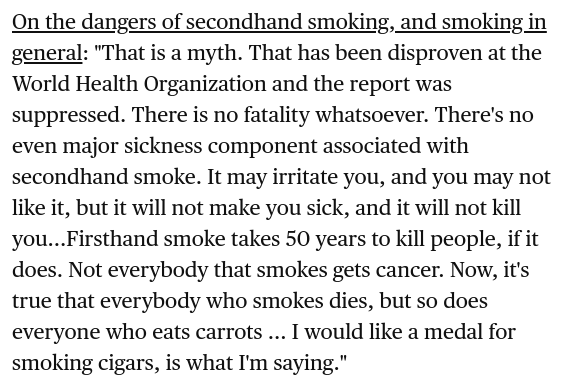 Rush Limbaugh was more of a conservative index and perhaps a reactionary icon. He claimed whenever cornered with a political lie that he was an entertainer rather than any credible media source. “Rush Rooms”  everywhere should be festooned with black crepe.

Trump Plaza in Atlantic City has been demolished, and Rush Limbaugh is dead. Saying that for no reason at all.

Rush Limbaugh, the conservative media icon who for decades used his perch as the king of talk-radio to shape the politics of both the Republican Party and nation, died Wednesday after a battle with cancer. He was 70 years old.

Limbaugh announced in February 2020 that he had been diagnosed with advanced lung cancer. Limbaugh continued to host his show while undergoing treatment, and he told listeners that he remained hopeful he would defeat the disease.
A pioneer of AM talk-radio, Limbaugh for 32 years hosted “The Rush Limbaugh Show,” a nationally-syndicated program with millions of loyal listeners that transfigured him into a partisan force and polarizing figure in American politics. In many ways, his radio show was like the big bang of the conservative media universe. “The Rush Limbaugh Show” helped popularize the political talk-radio format and usher in a generation of conservative infotainment.
Using his sizable platform, Limbaugh advanced conservative ideas, though he often waded into conspiratorial waters and generated controversy for hateful commentary on gender and race. During the course of his career, Limbaugh started a number of fires with his commentary.
Limbaugh offered a conditional apology after he accused actor Michael J. Fox of exaggerating his Parkinson's disease and apologized when he a insulted law school student Sandra Fluke. He relentlessly attacked President Barack Obama, going as far as to fan the flames of birtherism, the discredited idea that Obama was born outside the United States and therefore not eligible to be President. And, in the last few years, he peddled “deep state” conspiracy theories, providing cover for President Donald Trump, who he counted as a friend.
More recently, Limbaugh appeared to approve of some forms of political violence in the immediate aftermath of the January 6 insurrection at the US Capitol. He also drew backlash at the outset of the pandemic when he dismissed the coronavirus as the “common cold” and contended that it was being “weaponized” by members of the mainstream press to bludgeon Trump and harm his re-election chances.
x

Rush Limbaugh has died at age 70. The conservative talk-radio pioneer began treatment for lung cancer just over a year ago. https://t.co/hRrqAfZp2m

Trump still lying about election: “Rush Limbaugh thought we won. And so do I by the way. I think we won substantially … You would have had riots going all over the place if that happened to a Democrat. We don't have the same support at certain levels of the Republican system.”

That time Rush Limbaugh made fun of Michael J Fox and his Parkinson’s disease. pic.twitter.com/7CuHlE5Lpy

I try never to criticize someone on the day of their death. So I will simply criticize Donald Trump for debasing the Presidential Medal of Freedom by awarding it to Rush Limbaugh.

Rush Limbaugh dedicated his career in broadcasting to worsening the public discourse, promoting political division, and using his platform to punch down at marginalized communities. He profited handsomely from that effort and leaves this country worse for his contributions.

Who else just filed a #FOIA request with FBI for Rush Limbaugh's FBI file?

“Rest in Piss” is trending because Rush Limbaugh died.

I don’t know who the first person to write this was, but how dare you. How dare you come up with the perfect joke before the rest of us could.

All I can think of is the Sunday circa ‘94 I arrived at my desk at ESPN to find an awestruck Rush Limbaugh standing there looking into the ESPN Newsroom, gushing over our work, and quietly saying “I’d trade everything I’ve ever had if I could co-host SportsCenter.”