Marcus Vindictus: The jig is up!   Josephus: And GONE!   History of the World Part I

I’ve been waiting for this moment. I knew it had to come, there wasn’t any other available option. Y’all know me, and I’m not shy about putting my head out there and leading with my chin on a subject, making a prediction. But not this time. This time I wanted to keep my powder dry, and see exactly how it shook out, and who actually made the move first. And now I know.

Let your mind roam over the last 4+ years, since Trump basically became the de facto leader of the Republican party. What has been the dominant feature of the Republican party under Il Douche? Nobody wants to cross him. Everyone is terrified of his stubby Twitter digits. Plenty of people in the GOP will complain about Trump, but never with their name attached to the comments. When you read the news, it’s always unnamed Senators, or members who spoke on the condition of anonymity. Everybody in the GOP hates Trump’s bullshit, but nobody wants to lock horns with him. Until now.

Recall this. A day or so ago CNN announced that Mitch McConnell did not have the votes in his majority GOP caucus to pass a motion to summarily dismiss the charges against Trump in a Senate trial. And then, scant hours later, CBS News broke the story that senior White House staff had resigned themselves to the fact that Democratic Senate Majority leader Chuck Schumer had enough GOP votes to be able to force witnesses to be called in the upcoming trial of Trump. The obvious inference being from both stories that Moscow Mitch McConnell had lost control of his caucus to the point that he could no longer control the parameters of the impeachment trial.

Now, flash back to this. Over the last weekend, Maine Senator Susan Collins was quoted in an interview with her hometown newspaper as saying that she was in communication with a small number of Republican Senators to see if an agreement could be hammered out to allow witnesses to be called in the upcoming trial. I didn’t need to be there to know what the agreement was. The only agreement necessary was more than 51 votes. 52 votes would give His Lowness a target to maim, the deciding vote. More than 51 votes gives every GOP incumbent in the Senate cover, since no one of them can be pegged as the decisive vote.

The Trump dam of invincibility has broken, and Susan Collins is the stone that came spurting out of the wall of the dam. Susan Collins voluntarily outed herself in an interview in her hometown newspaper as being the Senator who was discreetly trying to hammer out a GOP Senator only agreement to allow witnesses to be called at the Trump impeachment trial. She did that knowing that it would be national news within 24 hours. And then, within days, the news breaks that Schumer has the votes from the GOP to force witnesses to be subpoenaed to testify at the Trump impeachment trial.

As of right this minute, all bets are off. Because Susan Collins made a purely political decision. She looked at the polling, she looked at the landscape, and she made the measured decision that she could no longer side with Trump and expect to be reelected. And rather than try to fly under the radar, she publicly announced her opposition to Trump in order to display her independence to her constituents.

This is critical because it gives every other vulnerable GOP incumbent in 2020 air cover to break with Trump as well. Incumbents like Tillis in North Carolina, Gardner in Colorado, and McSally in Arizona are all going to have to look seriously at internal and external polling, as well as impeachment polling, and decide just how tightly they want to tie themselves to Trump.

And the really funny part is that Mitch McConnell will have no choice but to back her play, at least behind the scenes. McConnell is a creature of power, and even he realizes that his power is hanging by a thread right now. He is going to have the unenviable task of going to Traitor Tot and telling him, Put your big boy pants on and take the hit. You’re not going to be removed in the Senate, but you have to give these people room to move. If you rant and rave on twitter to primary every one of these people from the right, we’ll end up with unelectable candidates in November, and even if you survive, you’ll not only have a Pelosi led House, you’ll have a Schumer led Democratic Senate.

How many times have I said it in the past? It only takes one. And this time, it turned out that Susan Collins was the one. If Collins had put herself out there and failed, Collins would be toast, and McConnell would still have a choke hold on his caucus. But Collins put herself out there, without a net, and she carried the day. And in doing so, she exposed the very real, and dangerous softness of Trump’s actual support in the Senate. Thanks to Susan Collins’s calculation and action, Trump is now facing the very real prospect of surviving a Senate trial without being removed from office, but having a majority of the Senate vote in favor of his removal. Kind of hard to claim a complete exoneration when the majority of the Senate says you should go. Don’t touch that dial. 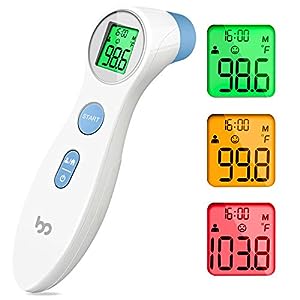 Touchless Forehead Thermometer for Adults, Kids and Babies, Digital In...