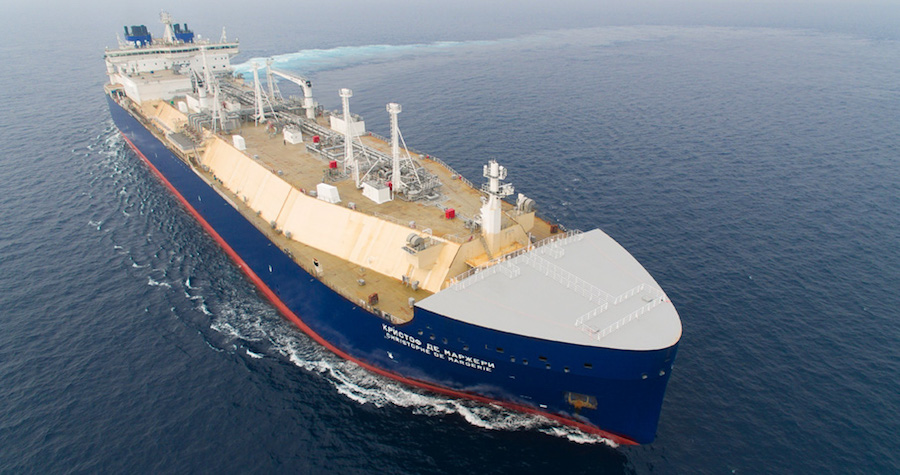 The “Arctic is already under such threat from so many angles, and while production there is expensive, it is also very, very high risk. It requires absolutely the strongest levels of global oversight.” Phoebe Barnard, Professor at Washington’s Conservation Biology Institute

Putin’s Russia made history today when the Christophe de Margerie, the enormous Liquefied Natural Gas tanker returning from the port of Yangkou, Liaoning province, China to the massive Yamal LNG processing plant in Sabetta, Yamal, Siberia, was able to cross the Arctic Ocean’s northern sea route without the assistance of an ice breaker in mid-February.

The Sentinel2 and the EU Copernicus satellites do not lie, the proof of additional horror out of the Arctic below.

#ImageOfTheDay#ClimateChange is changing the #Arctic

A premiere in February! pic.twitter.com/afMSnwwGrh

As huge swathes of Europe and North America experience bitter cold Arctic temperatures for the foreseeable future, Dr. Peter Wadham explains how a changing jet stream brings the deep freeze south while warm air is sucked into the Arctic will have devastating consequences for our ability to feed ourselves. His short video is at the end of the story.

Our Burning Planet has excellent background on the cargo ship printed at the end of January.

When the gigantic gas carrier Christophe de Margerie reached the easternmost point of the Eurasian landmass on 16 January, heaving with an enormous batch of liquefied natural gas (LNG), she quietly made maritime, and climate, history.

Able to carry 172,600m3 of LNG, enough to supply the country of Sweden with its gas requirements for almost four weeks, the 299m-long carrier had been enlisted as part of a Kremlin-subsidised partnership to help test the Northern Sea Route’s commercial viability. Her mission signalled the first time that a merchant vessel had hauled cargo clear across the Northern Sea Route without icebreaking support in the deep heart of an Arctic winter.

The article includes reporting on Putin touting the project as saving thousands of tons of CO2 from entering the atmosphere. There was also cheerleading for the deadly gas being used as a transition fuel.

Not everyone is ready to embrace the Kremlin and co’s fossil-fuel conquests with a similar level of congratulatory enthusiasm.

In 2014, following Russia’s annexation of Crimea, the US Treasury Department imposed sanctions on Novatek, Russia’s largest independent natural gas producer, severing it from the US financial system. After Russian opposition leader Alexey Navalny’s arrest in Moscow, European Union lawmakers called on the union to halt completion of the controversial Nord Stream-2 pipeline, intended to double natural gas supplies from Russia to Germany across the Baltic Sea. Also in January, the US slapped sanctions on that pipeline, saying it could be wielded as a weapon of political pressure against western Europe.

And, as 2020 tied with 2016 as the hottest years on record, top climate scientists interviewed by Daily Maverick expressed reservations over the Yamal LNG Project’s environmental considerations – especially in the wake of record 38°C heat hitting Arctic Siberia in June, and October sea ice slipping to an all-time low of 5.28 million km2 (a reported 450,000km2 below the record low mark for October set in 2019).

Never before has a commercial ship crossed the Northern Sea Route in February.

The 299-meter long carrier operated by Sovcomflot was on the 3rd of February located off the coast of Kamchatka. The powerful ship has a northbound course and is due to arrive in Sabetta, the LNG terminal in Yamal, on the 17th of February.

The tanker set out from the Chinese port of Yangkou on the 27th January, data from ship traffic service MarineTraffic shows.

At the same time, nuclear-powered icebreaker 50 Let Pobedy was on early Tuesday sailing eastwards towards the East Siberian Sea. The two ships might ultimately meet near the Bering Strait, and the tanker subsequently escorted westwards through the thick sea-ice.

The whole Northern Sea Route is now covered by ice. The straits between the mainland and archipelagos Severnaya Zemlya and New Siberian Islands are covered by thick fast ice, while the remaining part of the area has one-year old sea-ice that is between 30-200 cm thick.

There is no multi-year old ice in the area.

Climate deniers have been out in force this week telling me that the cold in Europe and US is proof that climate change does not exist and Earth is cooling
Reality warming has weakened the Jet Stream and Polar Vortex allowing cold air to sweep into Europe and warm air into Arctic pic.twitter.com/Wyld6ao7od

Air temperatures in the region can in this time of year drop to below minus 40C°.

It is not the first record-breaking voyage of the Christophe de Margerie. The ice-breaking tanker was the first LNG carrier that crossed the route. In May 2020, Sovcomflot sent the carrier across the route in a record-early voyage, more than a month earlier than the previous record.

In January this year, the tanker took part in another historical voyage, where two commercial carriers crossed each others’ paths in one of the most icy parts of the Arctic sea route in January.

The operations are part of a series on experimental shipments on the remote and icy shipping route. In July last year, Sergey Frank, board chairman of shipping company Sovcomflot, made clear that ice-class tankers will be sailing on the Northern Sea Route in January and February.

An unusual Ocean anomaly is being detected in the Gulf Stream, not seen in at least 150 years, bearing importance as we face the next weather seasons https://t.co/DkxuVn0JwZ pic.twitter.com/MpEghFkCDM

Climate tipping points are a series of events that do not bode well for the biosphere. We are in a hell of a mess.