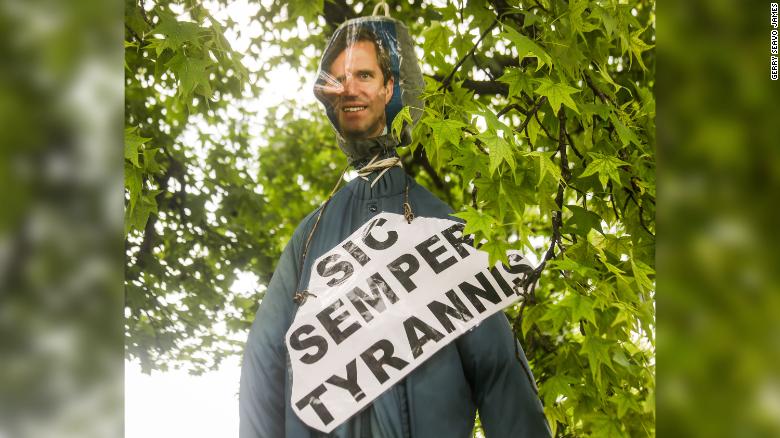 This happened yesterday in Frankfort, the state capitol in Kentucky:

What started out as a freedom-loving celebration of the Second Amendment ahead of Memorial Day turned into Gov. Andy Beshear being hanged in effigy and protesters chanting outside the governor’s mansion.

The Second Amendment rally, meant to inspire people “about what it really means to be FREE,” according to Take Back Kentucky, attracted at least 100 people on Sunday. They gathered from 1-4 p.m. at the Kentucky State Capitol in Frankfort.

It began as a celebration of constitutional rights but turned into a protest of coronavirus restrictions and Beshear’s administration. Folks toted their guns and waved American and “Don’t tread on me” flags. Taps honored the fallen, and free flags were given to veterans from all military branches.

Ed Bruce, who carried a replica colonial-era gun with a tag that read “1st Assault Rifle,” said he came out to make a point: government shouldn’t control what types of guns he or other law-abiding citizens carry, he said.

Note to those idiots:  Governor Andy Beshear has not called for anyone’s gun to be confiscated, except with a “red flag” law.  Those are laws were a judge could take away a person’s guns if they are deemed mentally unfit or a danger to the community.  The legislature held hearings on this matter, but no bill has been presented to the majority controlled legislature.  But maybe some of those idiots at this rally — sure looks like no mask wearing going on — see themselves in the mirror of red flag laws because…

As the rally wound down, organizers led the remaining crowd to the governor’s mansion to attempt to hand deliver a request for Beshear to resign. Groups carried signs reading “Abort Beshear from office” and “My rights don’t end where your fear begins” to Beshear’s home and chanted, “Come out Andy” and “Resign Andy.”

No one came to the door. A few Kentucky State Troopers got out of their cars to observe but did not attempt to stop the crowd. It’s not clear if Beshear was at home at the time.

The crowd returned to the capitol, at which time an effigy of Beshear was hanged from a tree outside the Capitol while “God Bless the U.S.A.” played over the loud speaker.

A man with a Three Percenter band around his arm helped hang the effigy, though Kentucky 3Percenters Inc. State Secretary Patsy Kays Bush said she was against it and didn’t want it to hurt the group’s image. Wheatley, too, said he did not support the effigy.

Emboldened is mine.  It gets better.

“However,” Bush said, “we’re at the point where rallies and shouting and hollering is just not working anymore.” She did support marching to the mansion, though, she said.

“That man (Beshear) has overstepped his bounds in more ways than one,” she said. “Somebody needs to get ahold of him. And we’re just done.”

She said part of the problem is Beshear’s approach to executive orders and recommendations like mask wearing. She said she feels like he gives orders instead of advice, and by nature of being in the mansion and at the Capitol, is too disconnected from how badly others are suffering from his rules.

The effigy bore a sign that read, “sic semper tyrannis,” which means “thus always to tyrants.”

After hanging for a short time while people snapped photos, it was cut to the ground.

The bitch Bush — and I don’t care if anyone wants to flag me for calling her a bitch — is essentially calling for violence because she is suffering about wearing a face mask.  ”Someone needs to get a ahold of him.  And we’re just done.”  Sounds like a threat of intimidation at least.  He’s recommending wearing masks, but she has trouble even with that.  Someone wearing a mask is part of the “suffering” from Beshear’s rules.

But she did nothing to stop a man for hanging Beshear in effigy near his home.  And that “sic semper tyrannis” line was used by Booth when he shot and killed Abraham Lincoln.  Anyone think that was by accident?

The so called Republican establishment has condemned this action, but don’t buy that for a millisecond.  From Trump on down, Republicans are calling for violence against Democratic governors who are trying to protect their citizens agains COVID-19.  And their deranged followers are moving right up to the edge of violence.

(85587)
$0.00 (as of May 16, 2022 08:15 GMT -04:00 - More infoProduct prices and availability are accurate as of the date/time indicated and are subject to change. Any price and availability information displayed on [relevant Amazon Site(s), as applicable] at the time of purchase will apply to the purchase of this product.)