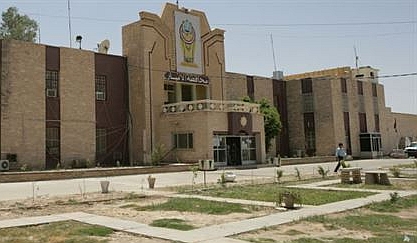 In Ramadi, Iraq, last week a force of some 200 ISIS fighters carried out a successful suicide-based attack on the Government Center building. A chain of cars drove in and blasted check points and strong-point bunkers. The main ISIS force engaged defenders in a 30 minute battle that ended with the defenders retreating without destroying files, setting explosives, or doing much of anything useful. The defenders left the GC building because they were ordered to leave.

It wasn't much of a battle. Defenders lost 15 killed as against a dozen suicides and some number of other ISIS hit with RPGs and bullets. There were bodies all over the place. But nothing to compare with the slaughter at the village of Zauiyat Albu Nimr in 2014 with 500 dead and women and children stuffed in a well. Another similar ISIS attack in 2014 at University of Anbar was beaten off with grenades and dozens of heavy machine guns. Those defenders had an additional advantage: open lines of fire.

What was lost in Ramadi last week is this one building, known as “the GC” along with the very sparsely inhabited wreckage that is the center of Ramadi. Which is still a wreck from the 2000s. Not reconstructed after 2003-2009.

O.K., folks, here we are at the Government Center building just off Route Michigan.

Still in ruins in 2014 and today. To me this image recalls photos of Leningrad and Stalingrad from just after their Great Patriotic War.

Artillery vs. snipers over time does destruction like nothing else.

(Robert Gates is on with Charlie Rose talking about “getting them out of there.” ISIS out of Ramadi. He is sadly the same brand of tactical idiot as Petraeus. Fact is, there is no point whatsoever to “pushing them out.” Kill every xxxxxxx one of them or don't bother getting in the game. Gates is also talking about ISIS “nesting” in Ramadi. Gates hasn't seen Ramadi. As you know from the above images, that area is a junk heap. He repeats: “getting ISIS out of Iraq. Not sure how we're going to do that.” Wonderful talker, but this former SecDef is indeed a tactical idiot.)

So let's get to the present. To May of 2015. What little was left of the civilian population from central Ramadi ran for their lives. They're still running. What, the sixth time for that?

Wanna play Marco Rubio for a minute? Tell somebody from Ramadi that “the world is better off without Saddam” ??? Make dxmn sure, first off, that hajjie listener can't get his hands on your throat.

[Rubio and the House of Sa'ud might be closer than we'd think. Contrast Ramadi 2015 with other Sa'ud/GCC projects: the on-going $60 billion expansion to the Grand Mosque in Mecca, for one. And the $400 billion going for subway and high speed rail and the like. And the barely adequate, gold handled Mecca Hilton and the other hotels that block any and all view from the Grand Mosque to the mountains, formerly gloried by the Prophet. (Today and into the Sa'ud future it ain't your grandfather's Hajj. It ain't even Mecca. Man-Mecca-Hattan, more like it. It's a place with malls and Fifth Avenue stores.) Rubio also backs the Sa'ud's own Big Gaza, called Yemen. That's the KSA Air Force doing to Yemen what Netanyahu did to Gaza, what ISIS is doing to Iraq. So far KSA has killed half as many in Yemen as Gaza 2014.]

The city of Ramadi held 200,000 people under Saddam but by 2007 Ramadi was down to under 25,000 as the first of these artillery-vs.-sniper battles had made the center of town unlivable. The main souk closed. The schools and teaching hospitals closed. Eventually the peripheral neighborhoods recovered and some 120,000 people returned (2009-2014.)

“The Government Center (building) is a key target for insurgents because it represents the prospects of peace and prosperity in the province.”

That's with central Ramadi a ruin.

War is good for you, right? Like cancer sticks. Keeps you thin. Really? Keeps down the wog/hajjie count, truth be known. Tell me this is not insane.

What Americans called “Al Qaeda in Iraq” had been driven off to Syria by Hero General Petraeus. Not destroyed. Pushed. A concept previously unknown to warfare. Well, “AQI”/ISIS comes back in 2014 with a hundred times the firepower they had in 2006-2008. That's based on extraordinary support from Wahhabi fanatics out of Arabia and their GCC allies.

There we are, back at June 2014: ISIS rolls into Iraq with two very large groups of motorized caravans. They carry thousands of itinerant thugs, martyr wannabe pre-suicides, 20mm and 23mm anti-aircraft guns on pickup trucks by the hundreds, small arms, and stashes of ammunition. Also, they carry plastic explosives by the ton to facilitate the suicides. This is the military face of vast Wahhabi revival. It continues a Great Purge out of Syria aimed at eliminating demons/djinn/Evil Ones that have possessed tens of millions of heretics and Infidels as well as Sunni apostates.

The Wahhabi world that supports ISIS generates its projects out of a world view that features an earthly reality inhabited by supernatural beings. People don't have different religions because their parents come from different cultures. No way. People do not think. no way. Non-Wahhabi failures occur because Satan's minions possess humans.

That wondrous principle applies to all of Hinduism, the Shi'ia, Zoroastrians, primitive tribes, …you name it.

“Imposters masquerading as Muslims” was a phrase coined by Abd al-Wahhab for non-Wahhabi/Salafist Muslims. He applied slogans from Ibn Taymiyyah, translated from 14th Century Arabic to modern Arabic.

The Hajj is where the Wahhab clan prove their case. They get all the way to spiritualism and such as “proof” by the presence of long-dead Martyrs. We're talking the Kingdom of Saudi Arabia and its official religion. Something as simple as celebrating the birthday of the Prophet is condemned as idolatry. This is not a rebellious cult out on a mountain somewhere. They have their own police force, their own courts. They do indeed run the Hajj.

This Wahhabi doctrine and its various fakeries are what drive ISIS. Point for point. Slogan for slogan. Beheading for beheading — the “crimes” for which ISIS beheads its victims are the crimes for which individuals are beheaded on orders from the Wahhabi religious courts. Same for crucifixions.

The original Wahhabi organization invaded their neighbors and pillaged, much like ISIS. Their adventures continued with varying success until 1815 and 1818 when Ottoman Egyptians and Turks used military force to crush their army and sack their capital at Dariyah, between Medina and Riyadh in central Arabia.

Look for an analysis in corporate media that links ISIS with Wahhabi fundamentalism. Maybe you will have more luck than I did. Huffington Post carried a good piece in 2014 from Alastair Crook. The Freepers did a pretty good job, too. A fair summary of Jordan Times's “We Have a Problem” from Zaid Nabulsi.

WaPo and NY Times, not so much.

ISIS indulgence of mass murder, including killing women and children, reflects practices from before the House of Sa'ud took over Arabia in 1902. The deal giving the Wahhab clan control of KSA's religion and courts came in about a decade later, which was followed by Ibn Sa'ud having to put down yet another Wahhab/Salafi force known as the Ikhwan. He had encouraged these Ikhwan, then in the 1930s when they threatened him he used his professional military corps to take them out.

ISIS has thousands of cheap mercs fighting in Syria and Iraq. These guys are paid. The wages are low but they are paid. In addition ISIS has a supply of dreamy young men lined up to commit suicide. For the suicides this is a jihad/Holy War.

ISIS loses in Iraq have been running to 2,000 a month for most of a year. That toll has taken the heart out of their operations. A year ago ISIS could mount a 1,200 fighter assault on a large town and do the same thing a week later on the other side of the country. They could send raiding parties all the way to the border with Iran. None of that is possible today.

The attack on the GC building in Ramadi looks to have been done for show.

There was nothing much there of military value. A small armory. Computers. Maps. Files. Nothing critical that a conqueror needs. Instead, the GC building is important to ISIS from what it represented back in the 2000s when “AQI,” so-called, hit the building repeatedly with mortars and sniper fire. They lost dozens of fighters and accomplished next to nothing.

As “AQI” they worked so hard to damage the GC that now they couldn't resist putting everything they had to it and taking over the GC today no matter the cost.

Each ISIS attack is reported like it was January, 1968, and 70,000 North Vietnamese had crossed the border into South Vietnam to do battle during their Tet Offensive. OMG what a terrible failure that ISIS can attack something.

Every GOPer within range of a television camera opines that, “Obama is a weak president.”

Corporate media are committed to perpetual war, first off. Their line on ISIS is that it is going to take two or three years to “push them” out of Iraq. Their line on Syria is that getting rid of the Assad regime is a prerequisite to defeating ISIS. That seems half crazy, but they do repeat it every opportunity. Syria is Socialist and Ba'athist — a growing nation until the recent Sa'ud/GCC interventions.

There will be ice cream in Hell before our media report the Hizb Allah/Hezbollah position: that ISIS is an extension of the Sa'ud-Wahhab alliance. That the threat of terrorism to the West is not connected to Hizb Allah today, but solely to Sunni extremists.

MSM have forgotten the lessons of 9/11 ??? On the evidence, you betcha.

And playing up each and every ISIS attack is a big part of what fuels ISIS recruitment.

It's all good for Perpetual War. That's a theme from the Bernie Sanders campaign.

(32744)
$348.00 (as of May 16, 2022 23:57 GMT -04:00 - More infoProduct prices and availability are accurate as of the date/time indicated and are subject to change. Any price and availability information displayed on [relevant Amazon Site(s), as applicable] at the time of purchase will apply to the purchase of this product.)