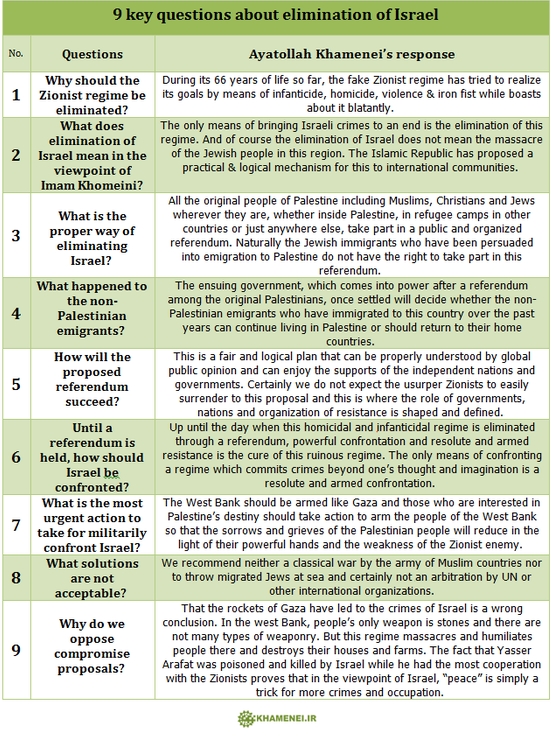 I count 43 interruptions for applause.

I count one substantive. That is Prime Minister Netanyahu's assertion that the twitter account of Iran's Ayatollah Khamenei was used to post statements calling for “annihilating” Israel.

In fact, the instrument for “annihilation” is a regional election.

I don't see anything about nuclear weapons. Is there anything even close? This image and the Farsi version of it present a One State option.

The idea of a regional election to erase/annihilate Israel suggests to me that the Ayatollah is slipping into old age. What he calls for is a One State resolution of conflict. The time for a One State Solution was 1948/1949 when the United Nations offered exactly that plan and the Arab states rejected it and declared war.

In 1949 this election would have made sense. Compared with what happened, it would have been wonderful for Jews and for Arabs. Today it is an older man's dream.

Elsewhere in Netanyahu's speech he goes on about his Lebanese enemies. Hizb Allah/Hezbollah has been at war with Israel for 30 years, since they were founded in 1985.

There are many quotes available from Hassan Nasrallah. After his son, Muhammad, was killed in a clash with Israelis I could imagine him saying just about anything aimed at Israel and Jews generally.

“If all the Jews gather in Israel, it will save us the trouble of chasing them down around the world.”

But this specific statement which Netanyahu attributes to him is not there in Arabic, not supported. There are dozens of quotes from Nasrallah that the PM could have used that are documented. Why use something that is likely bogus?

Nasrallah is certainly anti-Semitic. One taped statement is typically colorful: Jews are “the grandsons of apes and pigs.” Used to be “dogs and pigs,” so there's that. We're talking a region where Israel had a radio station up for decades broadcasting curses in Arabic — aimed at the local Arabs.

As a guess Nasrallah's no more anti-Jew than Netanyahu is anti-Arab. These guys are not going to meet in the Rose Garden for a cup of tea.

Of some interest, it also seems that Netanyahu is unaware of plutonium:

That is absurd, technically. The second nuclear weapon from 1944/1945, called “Fat Man,” was built quite apart from the U235 approach the Prime Minister describes. And if Iran had wanted a nuclear weapon they could certainly have built a few back in the 1980s during their war with Saddam Hussein. (Like Israel, like Fight Club, don't talk about it.)

Netanyahu's world is filled with enemies:

“So when it comes to Iran and ISIS, the enemy of your enemy is your enemy.”

Really ??? Iran hasn't fought an aggressive war since 1722. ISIS is the Saudi proxy for Iraq-Syria-Iraq that brought us Hell on Earth. To Netanyahu, they're just enemies. Even talking to Iranians is bad.

Evidence ??? Apart from the twitter image, what am I missing? I don't see it.

For the full text of Netanyahu's speech, go below the fold:

(51328)
$17.62 (as of May 16, 2022 22:18 GMT -04:00 - More infoProduct prices and availability are accurate as of the date/time indicated and are subject to change. Any price and availability information displayed on [relevant Amazon Site(s), as applicable] at the time of purchase will apply to the purchase of this product.)