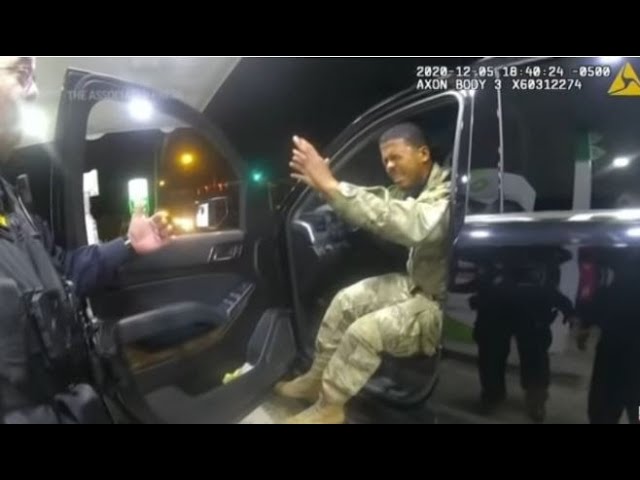 These two police officers should not only be fired but prosecuted for assault. The police officers are thugs, animals that have no right to be on the police force. For those who wonder why we talk about #DefundThePolice, this is a constant for some of us.

I first saw the story here at DailyKos before it got any major coverage. It had a personal effect on me. When one realizes that there is a force out there protected by law, the sense of vulnerability is seen as one that hunts us on a whim.

According to the Associated Press. Windsor Police Officer Daniel Crocker radioed that he was pulling Nazario over because his vehicle lacked a license plate and had tinted windows. He also described Nazario’s one minute, low-speed drive to the parking lot as “eluding police.” This, to Crocker, justified calling the stop a “high-risk felony traffic stop.” Which justified calling for backup and approaching the car with gun drawn.

Except that the temporary tag for Nazario’s recently purchased vehicle was clearly displayed in the rear window of the SUV. If Crocker had missed it initially, it seems impossible that he would have not seen it either during that “pursuit” conducted well below the speed limit. It’s also clearly visible as the car sits under the lights of the parking lot. By the time Crocker approached Nazario’s vehicle, he had to know that, if there ever had been any justification for the stop, that reason no longer applied.

Crocker might have stepped up, explained that he had missed seeing the tag initially, and sent Nazario on his way with an apology. Instead, he was joined by a second officer, Joe Gutierrez, and together the two terrorized Lt. Nazario … while never actually filing any charges.

We should all be sickened. Most importantly, how will America react to officers assaulting another innocent black/Latino body just because they could. And most Americans will give them a pass in court.

(22502)
$179.00 (as of May 22, 2022 05:41 GMT -04:00 - More infoProduct prices and availability are accurate as of the date/time indicated and are subject to change. Any price and availability information displayed on [relevant Amazon Site(s), as applicable] at the time of purchase will apply to the purchase of this product.)