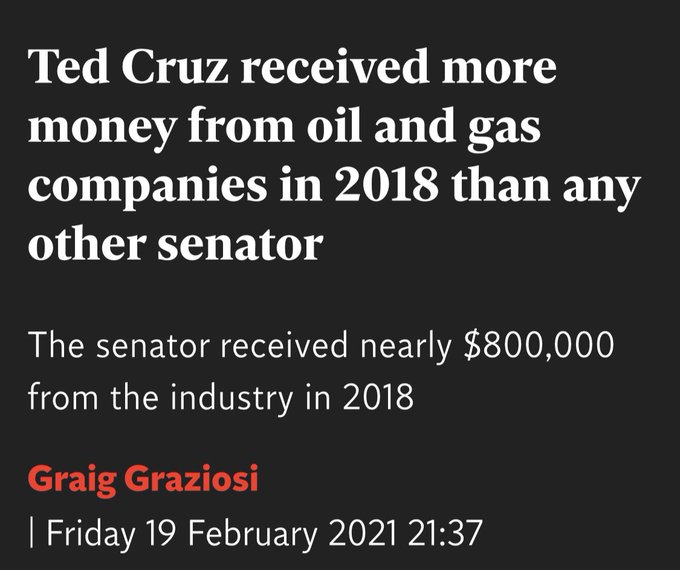 The usual Cruz hypocrisy, the pot calling the kettle violent. Because the final term of Ted Cruz will feature more nonsense serving corporate energy interests among other contradictions. He’s flailing about today with the latest nominees for DoJ, among other fake outrage. It’s an old tactic, because Cruz loves stirring up the other chamber with little accountability because he believes he can lead their GOP members in the absence of the previous guy, riffing on white performative outrage against Maxine Waters.

Why is Ted Cruz in a State of Rage?

Because Biden DoJ nominees Vanita Gupta and Kristen Clarke have never backed down from his brand of macho intimidation. Get used to it, Ted. pic.twitter.com/Je2ZQ9TZAG— Senate Judiciary Committee (@JudiciaryDems) April 15, 2021

❌ Attack (and dethrone) God
❌ Tear off those mattress tags (all of them)
❌ Spoil the ending of movies 3/4 in
❌ Refer unironically to “fur babies”
❌ Full Communism https://t.co/Ho56lq5B0N

“It's not like this guy is some peaceful prophet of gentility. This is the man who wants to do unspeakable things to books that say mean things about him, asking his supporters to vote on whether we machine-gun John Boehner's book, take a chainsaw to it or burn the book and light cigars. Where does that rank on the they-are-tearing-us-apart meter?”

With the defense having rested in former Minneapolis police officer Derek Chauvin's murder trial, Rep. Maxine Waters of California was asked how “justice for George Floyd” activists will response if Chauvin is found not guilty. And the congresswoman called for a vocal response if that happens, saying, “We've got to get more confrontational. We've got to let them know that we mean business.” Sen. Ted Cruz of Texas was among the far-right Republicans who claimed that Waters was advocating violence — and CNN's John Berman called Cruz out and reminded viewers of the ways in which the Texas senator's false claims of widespread voter fraud encouraged the January 6 assault on the U.S. Capitol Building.

On CNN's “New Day,” host Berman explained, “She didn't say what type of confrontation. Still, this is not the language that business owners in Minneapolis want to hear or that people calling for calm, including the president or the family of George Floyd (want to hear).”

But he went on to explain why Cruz is the last person who should be accusing a congresswoman of overly incendiary rhetoric.

Berman told viewers, “House Minority Leader Kevin McCarthy called it incitement of violence and said he will take action if Speaker Nancy Pelosi does not. But this is how Ted Cruz chose to respond in a tweet: 'Democrats actively encouraging riots and violence, they want to tear us apart.' That's Ted Cruz of the not accepting the election results before or after the insurrection Cruzes, which might lead one to wonder if this a case of the pot calling the kettle violent.”

there are six sitting senators who objected to the electoral college count, even after the insurrection:

Just an evergreen reminder that there are six sitting senators who objected to the electoral college count, even after the insurrection:

Given that Ted Cruz recently went to Mexico on vacation when he and his constituents were freezing because of a power grid failure, you might expect him to sit this one out. But the first rule of Trumpism is complete shamelessness. https://t.co/Bo7M4nSHve— Aaron Rupar (@atrupar) April 22, 2021

Maybe we want to know an entirely different energy industry, one from this century.

We haven’t forgotten about Josh Hawley and Ted Cruz’s role in the insurrection and attempting to overturn the election. They shouldn’t be in the Senate.

Sen. @tedcruz on DC statehood and Supreme Court expansion: “What Senate Democrats and House Democrats are trying to do is fundamentally corrupt, their first priority is to change the rules to stay in power.” pic.twitter.com/Er9fNfJfqd

The country remains divided over the Jan. 6 Capitol riot. The division is reflected in voter surveys, news coverage, and millions of social media posts. But the tension is also on display in small, idiosyncratic communities where residents realized some of their own were at the Capitol attack and may have cheered it on.

The January 6th Capitol riot still looms over towns that saw their neighbors in the crowd. https://t.co/h4klrcZ4uO

Or 45 getting a tiny bowl for losing an election? pic.twitter.com/eNZTVKZvb7

Some pics from a protest in front of the White House where climate activists have dumped cow poop to protest Biden’s “bullshit” climate plan #EarthDay pic.twitter.com/k2mf0o7fJq

'Weathering with You' is one of the most grounded depictions of what climate collapse will probably look likehttps://t.co/yERggQtRkq

One of the slimiest GOP talking points of all is the idea that voting limits are needed to restore GOP voter “confidence” in elections.

There's no *actual reason* to lack confidence. Yet Republicans are regularly allowed to skate with this nonsense:https://t.co/DyjsWsoSqi pic.twitter.com/ku5xH9lElL

(32700)
$348.00 (as of May 15, 2022 23:43 GMT -04:00 - More infoProduct prices and availability are accurate as of the date/time indicated and are subject to change. Any price and availability information displayed on [relevant Amazon Site(s), as applicable] at the time of purchase will apply to the purchase of this product.)