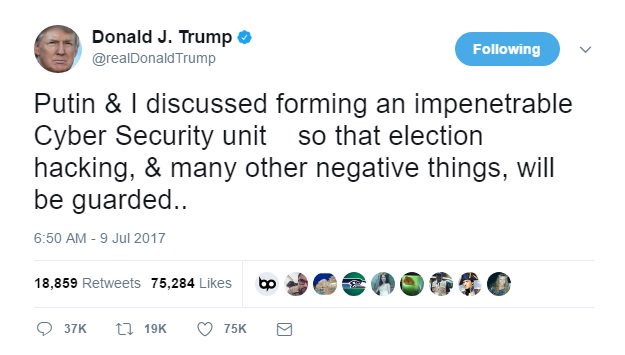 A surprise announcement from the Russian news service, TASS: According to the FSB in Russia, the US government has now agreed to carrying out joint cyber operations with Russian intelligence.

This bit of cynical non-collusive activity first was mentioned around the time of firing Comey and that code-word security gaffe Trump made while Trump invited the Russian Foreign Minister Lavrov and then-Ambassador Kislyak into the Oval Office. It continues to be mentioned by Trump as he submissively appeases Putin.

Then this joint US-RU effort was mentioned again at the meeting in Helsinki, because among many things, Russia wanted the US to hand over former US ambassador McFaul for interrogation.

So what’s the next step in this bit of active measures — perhaps joint cooperation between Russia and the US to find the Ukraine corruption mentioned in #Trumpeachment, because isn’t that the real(sic) threat. TASS may just be trolling the US-IC.

More likely this will be an opportunity to make liberals cry, except that unlike the NRA, anyone remembering the Cold War might actually think twice about such “cooperation”. Even so, what could be more disruptive except those continuing cyber attempts from Russia and a host of countries on the US power grid, not to mention the election system. The Russians might want more insight on US cyber-operations which only get mentioned occasionally but have had serious effects for example on Iranian nuclear activities and DPRK rocket guidance.

This resembles OJ’s search for the real killer. Then again RT and FoxNews might merge and would we even know unless Mick Mulvaney held a press briefing.

DNC chief security office @boblord: “This attempt is further proof that there are constant threats as we head into midterm elections and we must remain vigilant in order to prevent future attacks."

However, operating a joint working group on cybersecurity in order to examine the digital and forensic evidence of Russian interference in the 2016 U.S. election would be both counterproductive and dangerous. Enabling Russia to gain an even greater understanding of U.S. cyber defences and analytic capabilities would put American citizens and businesses at even greater risk of attack.

In addition to the knowledge that Russian operatives have influenced U.S. elections through cyber operations, it is also clear that its handling of public vulnerability information demonstrates a fundamentally opposed approach to information security.

To authoritarian states like Russia and China, “control” of information technology and their public is the paramount concern. For Russia, “control” is a term that means complete power over and domination of the domestic information and technology space by the government.

This translates to control over hardware, software, and platforms, but also control over the content on those platforms and the citizens who utilise them. This type of state control is what we mean when we assess that the Russian vulnerability management is intended to support control of the Russian state– their database is a tool the Russian state uses to impose technology reviews on companies and other draconian controls on users.

(51510)
$17.62 (as of May 18, 2022 23:38 GMT -04:00 - More infoProduct prices and availability are accurate as of the date/time indicated and are subject to change. Any price and availability information displayed on [relevant Amazon Site(s), as applicable] at the time of purchase will apply to the purchase of this product.)