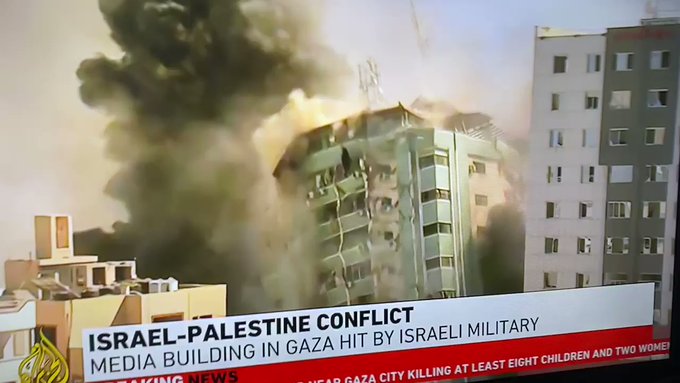 Prior warning doesn’t excuse the destruction of media headquarters for Al Jazeera and the AP.

An Israeli airstrike destroyed the Al Jazeera office in Gaza. The Israeli military warned they would hit the building that houses media organizations including the AP.

Journalists who worked there had been reporting on the Israeli attacks on Gaza. pic.twitter.com/fZVo3TFEoO

BREAKING: Israeli airstrike flattens high-rise building that houses The Associated Press, Al-Jazeera and other media in Gaza City, about an hour after evacuation order.https://t.co/V23sbhdEQw

2/ NPR: Why did Israel never tell AP or any media there that Hamas was allegedly in the building?

REGEV: We ensured there would not be innocent people being caught up in the crossfire, by giving adequate warning.

4/ NPR: Why did Israel never tell AP before an hour?

REGEV: We gave them enough time to ensure that none of their people would be hurt in our operation.

NPR: How long has Israel known that Hamas has been using that building?

It appears that blaming news outlets for getting bombed and mocking them is a PR strategy of some sort? pic.twitter.com/lE0MomH0c0

Journalists are often targets and unknowing conduits of disinformation. Bittman referred to them performing as “unwitting agents. A Soviet intelligence officer once said that if the US didn’t have a free press, they would have to invent it for us (b/c it was so useful to them). https://t.co/U6AL91x33z

Ibrahim Shikaki's post outlines how the demise of the Palestinian productive sector can be seen as a symptom of the Israeli occupation. https://t.co/tfhdedVKDI

(28)
(as of May 18, 2022 10:23 GMT -04:00 - More infoProduct prices and availability are accurate as of the date/time indicated and are subject to change. Any price and availability information displayed on [relevant Amazon Site(s), as applicable] at the time of purchase will apply to the purchase of this product.)