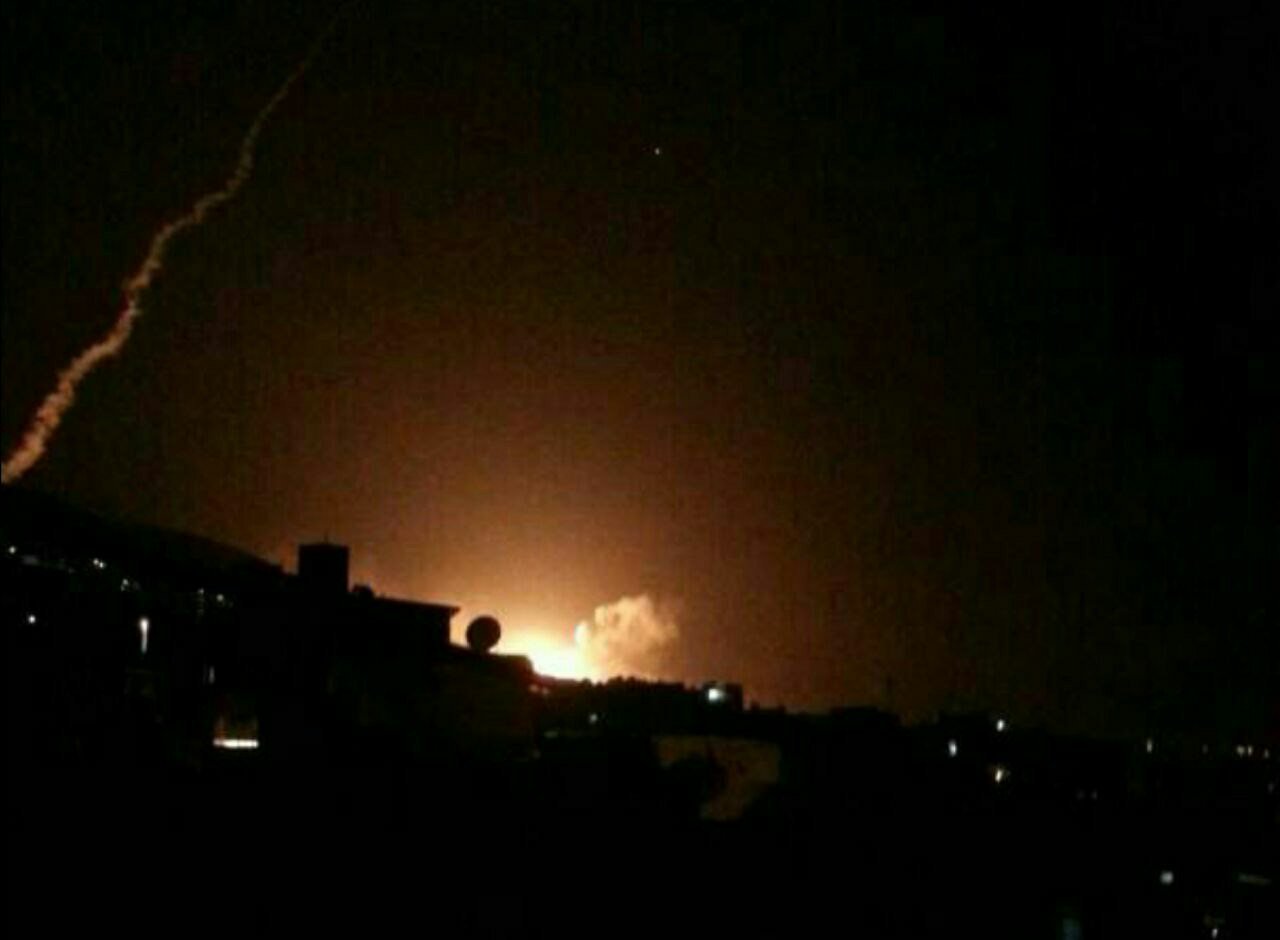 I’ll start this out relatively empty but update it quickly.  Trump has approved strikes on Syria.

21:03 EST: Sounds of explosions in Damascus.

Reminder: Just half an hour ago, a “senior White House official” told a VOA reporter that he didn’t believe claims that there was going to be a press briefing.

21:06 EST: Trump: “Hopefully we’ll someday get along with Russia. Maybe even Iran. But maybe not.”

Now he’s boasting about US success against Da’esh.

I’ll try to get pictures from Syria as soon as I can.

Trump says that the US is prepared to sustain a response.   So not a single strike.

21:12 EST: Dang it, I’ve got screenshots from a live feed but can’t find the feed… working on it.

Sorry how rushed this all is here people, I’m trying to keep up.  My apologies for any mistakes, bad formatting, etc, etc.

21:24 EST: Barzeh hit. Home of the Syrian Scientific Studies and Research Centre, thought to be a key element of the chemical weapons programme.

21:27 EST: CNN reporting that both manned aircraft and tomahawks are involved.  CNN cites sources saying that  Al-Dumayr airbase (suspected to be the source of last week’s chemical attack) is hit.

21:29 EST: Damascus airport reported “completely destroyed”, fires visible everywhere.  Of course, actual damage won’t be known for quite a while.

Reports of explosions in Homs.

21:39 EST: B1s reportedly involved in the attacks.  Cannot yet confirm.  It was apparently reported on Faux. Faux also claimed that some of the intelligence came from Israel.

21:41 EST: Reports that a Hezbollah headquarters was targeted in Quseir. That’s Homs.

CNN is blabbing on about how tough it is to find targets.  Well, they certainly don’t seem to be bloody lacking them now.

The UK element of the carefully coordinated joint action was contributed by four Royal Air Force Tornado GR4s. They launched Storm Shadow missiles at a military facility – a former missile base – some fifteen miles west of Homs, where the regime is assessed to keep chemical weapon precursors stockpiled in breach of Syria’s obligations under the Chemical Weapons Convention. Very careful scientific analysis was applied to determine where best to target the Storm Shadows to maximise the destruction of the stockpiled chemicals and to minimise any risks of contamination to the surrounding area. The facility which was struck is located some distance from any known concentrations of civilian habitation, reducing yet further any such risk.

21:49 EST: From CNN: Syrian State Media claiming to have shot down 13 missiles.

21:51 EST: Reports of hits on Republican Guard forces in Aleppo, looking for another reference.

No reports yet out of eastern Syria — but pretty much the whole west is reporting attacks.  Sounds like Operation Inherent Resolve forces are being kept out of this?

21:54 EST: Indirect reporting of missiles flying south from the al-Ghab plain. This would be strange; that’s rebel / Turkish controlled territory in the north. Could just be some opportunistic GRADs.

CNN is now confirming what Faux reported ages ago about B1s being used.

21:58 EST: More air defense footage. Pro-regime sources confirm Dumayr airbase hit. No reported casualties there at this time, but that might change.

22:01 EST: Pentagon confirms having targeted Dumayr (“the military base from which the chemicals were delivered”).  Confirmed targeted chemical weapons R&D and production. “Clearly the Assad regime did not get the message last year.”

They’re stressing that this is entirely separate from the campaign against Da’esh.

22:04 EST: Official to CNN’s Jim Sciutto: “What you’ve seen tonight is not the end of the US response..it’s not over”

22:06 EST: Pro-regime facebook pages denying strikes in Hama and Homs but “air defenses active in the area”.  Other sources confirming attacks in Hama.

Pentagon: no reports of coalition losses. Only known retaliatory action is surface-to-air missiles (aka air defense).

22:09 EST: Pentagon says, confusingly, that deconfliction lines with the Russians have been used, but they weren’t notified.  I’m not sure how to reconcile those two things.

22:11 EST: Contradicting earlier reports, Mattis said this is a one time thing.

Wait, just now he said “This wave of airstrikes is over.”  This wave.  Sounds like they’re leaving options open.

22:14 EST: Not seeing any reports of new attacks. Appears to have been quiet for 10 minutes.

Pentagon will give a review tomorrow. “Will through the night gather the operational detail”

Mattis was asked about his comments the other day and when he became convinced that the evidence concerning the chemical attack was definitive.  “Yesterday.”

22:18 EST: Pentagon states that there were other chemical weapons targets which they chose not to hit because of the excessive risk to civilians that would occur from doing so.

22:21 EST: Concerning the Douma attack: “We are very confident that chlorine was used. We cannot rule out sarin right now.”

22:22 EST: Not aware of any Russian or Syrian response at this time.

US used double the number of missiles this time vs. last time. Unclear how the efforts of the UK and France play into the picture.

Pentagon conference is over. They concluded by warning people to expect a significant disinformation campaign over the coming days.

22:26 EST: It’s going to be quite a while before the scale of the damage becomes clear.  We’ll start to get some on-the-ground reports of the damage tomorrow, but it could be weeks before a lot of useful information (such as comparison shots from private satellite companies) get released.

While CNN cast aspersion on the Syrian air defense claims (in fact, they did it again as I was writing this), 13 missiles shot down is quite believable, given the number of claimed shootdown sightings, plausible shootdown videos, and the past performance of their air defense systems combined with the attack covering a much larger chunk of the country. That said — 13 missiles is only a dent.

A big thing to watch for is how much of the Syrian air defense infrastructure was attacked as well (the US took out one system during the Shayrat missile attack).

It’s 2:30 here in Reykjavík.  I think I’ll slow down my coverage until I go to bed, as it’s been nonstop searching!

22:35 EST: 100-120 missiles fired. US middle eastern allies not involved, but briefed and took part in the planning, in order to prepare for any possible counter-action by Iran.

NATO issues its support for the attack:

22:39 EST: Russia has responded. Calls this a “pre-designed scenario being implemented”, adding “We warned that such actions will not be left without consequences.All responsibility for them rests with Washington, London and Paris”

According to the SANA correspondent, the triple aggression targeted the research center in Barza,  pointing out that the air defenses responded to a number of missiles targeting warehouses of the Syrian Army in Homs.

Story #2: “Air defenses faces the aggression and down missiles”

In short, to sum up their coverage:

22:57 EST: Fox correspondent Lucas Tomlinson quotes Gen. Dunford as saying that Russian guns and missiles remained silent, and that the only response came from the Syrian military, who fired some surface-to-air missiles “to little effect”.

23:00 EST: Reports from southern Lebanon that Hezbollah has been mobilized to an alert stage, anticipating an elevated risk of activity from Israel.

Elsewhere: claimed remains of a US missile.

No efforts have been made at this point to confirm this image..

23:05 EST: Canada issues its support for the attack on Syria.

23:08 EST: I can’t stay up any more.  Goodnight everyone. We’ll all wake to see what the daylight shows.  And dueling versions of the outcome.

(51689)
$17.62 (as of May 22, 2022 10:40 GMT -04:00 - More infoProduct prices and availability are accurate as of the date/time indicated and are subject to change. Any price and availability information displayed on [relevant Amazon Site(s), as applicable] at the time of purchase will apply to the purchase of this product.)