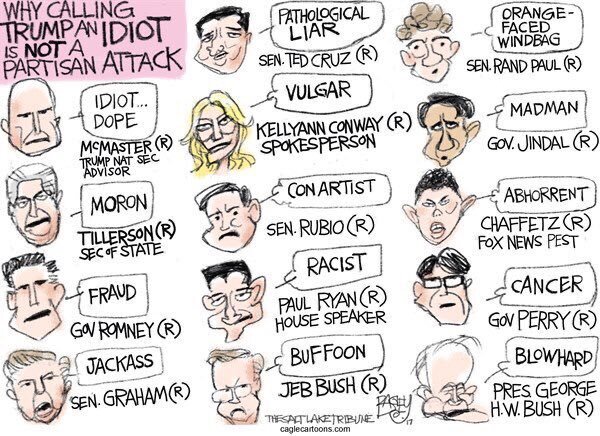 annieli
Mulligan’s Law, horseshoes and hand grenades: how can those same GOP senators distance Trump from his mob.

“No thinking person could seriously believe that the president’s January 6 speech was in any way an incitement to violence or insurrection.”

Trump's attorney comes out of the gates trying to claim that the incitement charge is dependent on the Jan. 6 speech. About that: https://t.co/D0oxhH2LaZ

One of Trump's impeachment lawyers, Michael T. van der Veen, filed a lawsuit against then-President Trump accusing him of making “repeated claims” that mail voting is ripe with fraud “despite having no evidence in support of these claims.”https://t.co/0YijCVGjsa

Trump's lawyer falsely says "the first two messages" Trump tweeted after the incursion on the Capitol began said "stay peaceful" and "no violence." No, the first one he tweeted said "Mike Pence didn't have the courage to do what should have been done to protect our Country…"

Link to that is here: https://t.co/3B2xqYweNK

Just a reminder before Trump's defense today that "high crimes" does not literally mean crimes outlined in federal or state criminal code; it means violations of the presidential oath of office.

Inciting a violent insurrection to overturn an election you lost TOTALLY counts.

Already this is wackadoodle. Seems like the defense is trying to tell us not to believe what we saw. This lawyer has the audacity to say that the people assembled at Trump's speech were peaceful patriots

A central paradox of the trial:

(1) Trump’s lawyers will argue that Trump’s supporters on Jan 6 were not controlled by Trump.

(2) Republican Senators will vote to acquit because they believe that Trump’s supporters are highly controlled by Trump.

They must recognize we are in new political environment in which one party has been radicalized by authoritarian, racist demagogues while the other earnestly tries to engage in problem-solving. Journalists are not diligently covering either half https://t.co/gYsRToyMX1

I wrote this, seeking to explain this phenomenon, last summer. But we are in new territory here. https://t.co/N9FQqZBjHE

Here’s the account @MikeLeeforUtah gave his local newspaper about intercepting a call from Trump meant for @SenTuberville during the insurrection.
Not clear how this differs from the one offered today by House managers to which Lee vehemently objected.https://t.co/8VonmjfD9C

To be clear: the source of the story, claiming that Trump and Giuliani had called Mike Lee on Jan. 6, was Mike Lee's own spokesman. https://t.co/jbVVcSrMVG https://t.co/EwTHd5DJoQ

“The word ‘democracy’,” the Republican Senator Mike Lee recently noted, “appears nowhere in the Constitution.” The reason, he thought, was “because our form of government is not a democracy.” “If what you wanted was a fascist form of government” the senator added, “you could get there far more efficiently, far more completely, using a pure form of democracy.” “Democracy,” he concluded over his Twitter feed, “isn’t the objective,” “liberty, peace, and prosperity are.” This view, while rarely stated publicly by elected officials, is nevertheless common among avid readers of the work of neoliberal founding fathers such as Friedrich von Hayek. In his 1944 best seller The Road to Serfdom, the Nobel Prize winner had explicitly argued that “democracy” was probably the easiest way towards “complete despotism” unless legally limited. Hayek’s aim was nothing less than the “dethronement of politics.”

The Capitol Hill Police communications are chilling. Any Republican that votes against conviction should be named and shamed often as #TeamSedition. They support murder.

(22204)
$179.00 (as of May 17, 2022 09:25 GMT -04:00 - More infoProduct prices and availability are accurate as of the date/time indicated and are subject to change. Any price and availability information displayed on [relevant Amazon Site(s), as applicable] at the time of purchase will apply to the purchase of this product.)