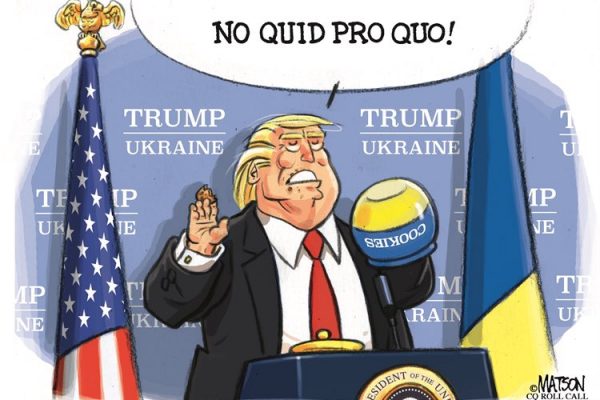 It is less likely that Gordon Sondland will plead the Fifth but might seek immunity as he faces perjury, among other things. “Mob boss blaming underling”.

ICYMI: Can Gordon Sondland invoke the Fifth Amendment? #MTPDaily @BarbMcQuade: "He's likely already waived that privilege. … If you have talked about the subject matter you have waived it as to other questions relating to the subject matter." pic.twitter.com/JSWQMNDaCB

On the issue of Rudy Giuliani’s involvement in foreign policy, Kurt Volker told the House Intelligence Committee, “He is the President’s personal attorney. I don’t know whether he was representing the President or whether he was doing his own things to try to be helpful to the President.” But in a supplemental declaration, Sondland testified that Trump “directed Ambassador Volker, Secretary Perry, and me, on May 23, 2019, to discuss issues related to the President’s concerns about Ukraine,” and that all of them, Volker included, “understood that satisfying Mr. Giuliani was a condition for scheduling the White House visit, which we all strongly believed to be in the mutual interest of the United States and Ukraine.”

BREAKING: A top White House national security aide told impeachment investigators that EU Ambassador Gordon Sondland claimed to be acting on Trump’s orders, and was regularly in touch with himhttps://t.co/KuCORKNi3h

”It was the first time something like this had been injected as a condition to release the aid,” Morrison said. pic.twitter.com/uhmvFHm8gM

(42754)
$0.00 (as of May 15, 2022 08:59 GMT -04:00 - More infoProduct prices and availability are accurate as of the date/time indicated and are subject to change. Any price and availability information displayed on [relevant Amazon Site(s), as applicable] at the time of purchase will apply to the purchase of this product.)