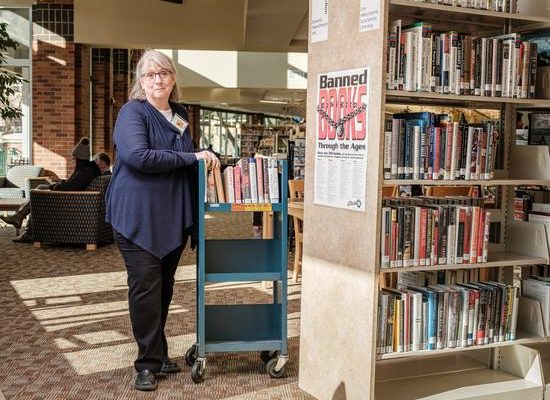 durrati
Anyone with even just sufficient powers of observation can see that Trumpists have a inherent aversion to acquiring knowledge, and at least one in Coeur D’Alene, Idaho is determined that no one else will be able to obtain any on their watch.

“COEUR d’ALENE, Idaho — From her office next to the public computer terminals, Bette Ammon finds herself peering through a window to watch patrons moving through the Coeur d’Alene library’s nonfiction stacks.

Someone has been hiding books lately — specifically, those that explore politics through a progressive lens, or criticize President Trump. They wind up misfiled in out-of-the-way corners where readers will be sure not to find them.

“I am going to continue hiding these books in the most obscure places I can find to keep this propaganda out of the hands of young minds,” the mystery book relocator wrote in a note left for Ms. Ammon, the library director, in the facility’s comment box. “Your liberal angst gives me great pleasure.”

This is not the library’s first battle with book hiders –  after white supremacists invaded the area in the 1980s, the city was awarded the prestigious Raoul Wallenberg Award for Civic Courage for its efforts in resisting the racists. With the money presented with the prize the city augmented their library’s catalogue of books on human rights, women’s’ issues, LGBTQ rights and such. The books started to go missing with such regularity they had to be locked away in a glass case.Library Director Bette Ammon.…

… and Commander In Cheat author Rick Reilly are determined, however not to let the current opponents of education win the day:

“Through it all, Ms. Ammon said, the library has managed to maintain the diversity of its shelves. In the nonfiction stacks, a book by Al Franken, the former Democratic senator, sits right next to one by Newt Gingrich, the former Republican congressman.

After the author Rick Reilly learned that his book, “Commander in Cheat,” about President Trump’s tendency to cheat on the golf course, had gone missing, Mr. Reilly announced that he was planning a visit to Coeur d’Alene to do an event.

He said he is going to bring 10 copies of his book to hide around the library for people to discover.”