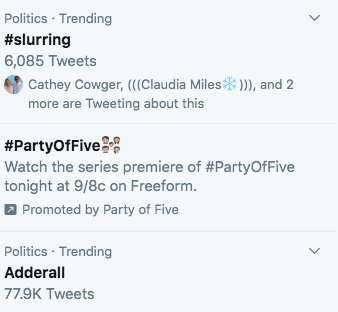 I have no idea why, but here it is:

#PartyofFive is a mystery, too. It might just be a promoted hashtag, or it could have something to do with Trump’s preferred post-Adderall “executive time” activity, now that Melania doesn’t want to touch him.

Of course, Trump was 30 minutes late for his little “everything is fine, nothing to see here” presser this morning.

Can’t really explain that one either.

Seriously, though. What the fuck was that? For a second I thought the giant cockroach that maintains a delicate symbiosis with Trump’s brain stem was going to break free of its blotchy rind and devour Jim Acosta from the head down.

This dude is not well. And we really can’t have that. You know, now that he’s bumbled our country into a completely avoidable war.