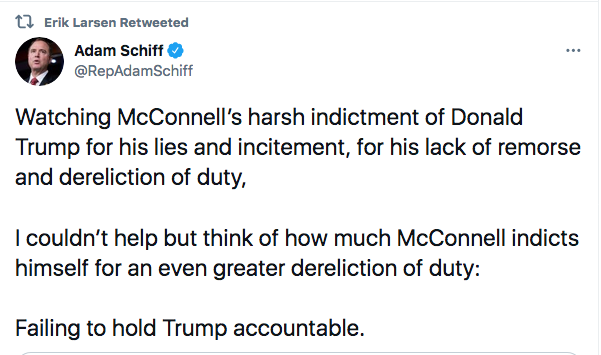 The GQP senate is an honor-free zone with pro-wrestling byplay, save the magnificent seven dead. Mitch McConnell is doing his best to keep the reality-TV show kayfabe going. Lindsey Graham who proclaimed he’d “had enough” of Trump is now going to Florida on MAGA business.

Graham on Fox says he spoke to Trump last night. “He’s ready to move on and rebuild the Republican Party. He's excited about 2022. And I'm going to go down to talk with him next week, play a little golf in Florida. And I said Mr. President this MAGA movement needs to continue.”

We are reminded that the country has one functioning, pro-democracy party and another under the sway of the MAGA mob and the instigator of a violent insurrection. Never has the gap between the parties been so great, nor the need for one side to prevail so essential to the survival of the republic.

THE GOP HAS ONLY SEVEN HONORABLE SENATORS.
– Jennifer Rubin at WaPohttps://t.co/OZNM2QaXLd

Two retiring senators (Burr and Toomey) showed some spine, but another who is not seeking reelection, Rob Portman (R-Ohio) — who fancies himself a dealmaker — continues to underwhelm. Even insulated from facing Trump supporters at the polls, he could not bring himself to render the obvious verdict. My colleague Max Boot’s observation is utterly vindicated: “Maybe the junior senator from Ohio and other mainstream Republicans couldn’t have stopped the Trumpist takeover of their party if they had tried. But they didn’t try. The cowardice of Rob Portman has done more damage to the Republican Party — and the republic — than the craziness of Marjorie Taylor Greene.”

Earlier in the day, House managers were compelled by Senate Democrats to accept the stipulated testimony of Rep. Jaime Herrera Beutler (R-Wash.) rather than her live testimony. Many Americans, including the House managers, learned plenty in the development of the case against the disgraced former president. There was far more evidence of guilt than we had imagined. The White House intervened to allow the mob to gather on the Ellipse. Scores of his MAGA followers believed they were acting on Trump’s command. We got even more evidence of his guilt and of the total irresponsibility of House Minority Leader Kevin McCarthy (R-Calif.) when we heard Herrera Beutler’s testimony read into the record: Trump knew the Capitol and his vice president were imperiled. He seemed perfectly pleased and indeed scolded McCarthy for not being as committed to him as the violent insurrectionists were.

Corruption is the death knell of a Republic. https://t.co/st6MZqPk0F

After voting that Trump was not guilty of the impeachment article against him, McConnell said in a Senate floor speech on Saturday that the mob that attacked the Capitol “did this because they had been fed wild falsehoods by the most powerful man on Earth.” McConnell, who egged on Trump’s election fraud falsehoods for months leading up to the deadly Capitol insurrection, said he ultimately voted in favor of Trump by arguing conviction of a former president isn’t the Senate’s role.

The next day, Graham complained on “Fox News Sunday” that McConnell placed a burden on the GOP heading as they try to retake control of Congress next year.

“I think Sen. McConnell’s speech, he got a load off his chest, obviously, but unfortunately he put a load on the back of Republicans,” Graham said. “That speech you will see in 2022 campaigns.”

“It was all white people!” https://t.co/AE2ssqisCr

GOP Sen. Bill Cassidy, one of seven Senate Republicans who voted to convict former Pres. Trump in his second impeachment trial, explains his decision: “It was clear that he wished that lawmakers be intimidated.”

This is like watching trials in Russia w lots of propaganda, altered evidence, gaslighting, and a predetermined outcome

Claudia gets a surprise from her mother, @KellyannePolls!

“Remember, honey. Winners are people who are willing to lose.”@claudiamconwayy | #AmericanIdol pic.twitter.com/paW0YcO9o8