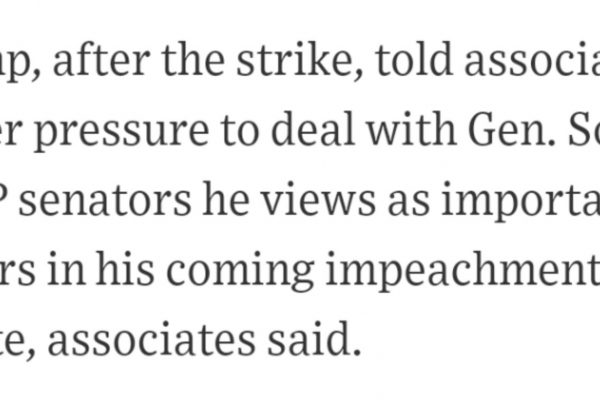 We now know the time range possible for imminent threats in Iran. Dog wagged, as the four US embassies claimed by Trump that were targeted have yet to be identified. In yet another qualification, IMPOTUS now claims “it doesn’t really matter” because Soleimani’s “horrible past” merited his assassination.

The timing proves that the Trump administration's justification for ordering the strike on Soleimani –– that he was planning imminent attacks on Americans –– was a LIE, so Trump did not have authority to order the killing without Congressional approval.https://t.co/wCAJJVO2FA

WASHINGTON — President Donald Trump authorized the killing of Iranian Gen. Qassem Soleimani seven months ago if Iran’s increased aggression resulted in the death of an American, according to five current and former senior administration officials.

The presidential directive in June came with the condition that Trump would have final signoff on any specific operation to kill Soleimani, officials said.

That decision explains why assassinating Soleimani was on the menu of options that the military presented to Trump two weeks ago for responding to an attack by Iranian proxies in Iraq, in which a U.S. contractor was killed and four U.S. service members were wounded, the officials said.

The timing, however, could undermine the Trump administration’s stated justification for ordering the U.S. drone strike that killed Soleimani in Baghdad on Jan. 3. Officials have said Soleimani, the leader of the Islamic Revolutionary Guard Corps’ elite Quds Force, was planning imminent attacks on Americans and had to be stopped.

“There have been a number of options presented to the president over the course of time,” a senior administration official said, adding that it was “some time ago” that the president’s aides put assassinating Soleimani on the list of potential responses to Iranian aggression.

Not the first time IMPOTUS has retweeted troll-bait:

Donald Trump has retweeted an image of Nancy Pelosi and Chuck Schumer in Islamic garb in front of an Iranian flag https://t.co/jVOaGPco6m

Only two days ago, President Trump wrote in Farsi on his Twitter feed to tell Iranians how he was “inspired” by their courage. He clearly couldn’t keep up his respectful tone for long. On Monday, he retweeted a badly photoshopped image of House Speaker Nancy Pelosi and Senate Minority leader Chuck Schumer in traditional Islamic clothing, along with the caption: “The corrupted Dems trying their best to come to the Ayatollah’s rescue.” The two were shown standing in front of an Iranian flag. The original tweet came from an anonymous Twitter account that has been pumping out pro-Trump and anti-Iranian government material. The photoshopped image was one of a number of Pelosi attacks Trump tweeted or retweeted when he woke up on Monday morning. Judging from his retweets, Trump appears to have been upset by Pelosi’s comments about the Iran crisis on ABC News on Sunday when she said there were a number of different reasons people were taking to the streets in Iran over the weekend, and urged Trump to “move toward peace, not escalation of war.”