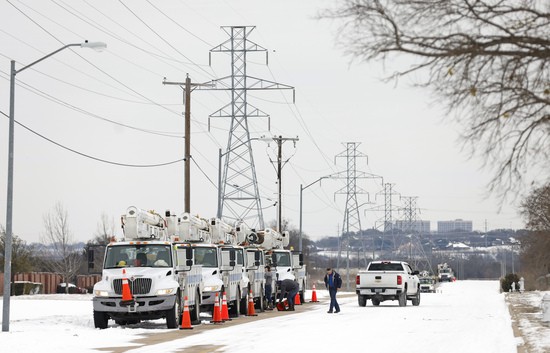 Sorry but having lived a long time is Pinko Commie Europe this morning I was gobsmacked by this piece of news.

Mr. Willoughby is among scores of Texans who have reported skyrocketing electric bills as the price of keeping lights on and refrigerators humming shot upward. For customers whose electricity prices are not fixed and are instead tied to the fluctuating wholesale price, the spikes have been astronomical.

The steep electric bills in Texas are in part a result of the state’s uniquely unregulated energy market, which allows customers to pick their electricity providers among about 220 retailers in an entirely market-driven system.

But when last week’s crisis hit and power systems faltered, the state’s Public Utilities Commission ordered that the price cap be raised to its maximum limit of $9 per kilowatt-hour, easily pushing many customers’ daily electric costs above $100. And in some cases, like Mr. Willoughby’s, bills rose by more than 50 times the normal cost.

Bloody criminal if you ask me.

“As you get closer and closer to the bare minimum, these prices get higher and higher, which is what you want,” Mr. Hogan said.

Fucking jackass, you deregulate and industry with no oversight, and you pass their abject failures on to the individual? [Some have written about this idiot elsewhere]. This brain-dead lunatic should not be allowed anywhere near  human beings.

Robert McCullough, an energy consultant in Portland, Ore., and a critic of Mr. Hogan’s, said that allowing the market to drive energy policy with few protections for consumers was “idiotic” and that similar actions had devastated retailers and consumers following the California energy crisis of 2000 and 2001.

That’s being too bloody nice by half.

There is of course this:

Some lawmakers and consumer advocates said the price spikes had made it clear that customers did not understand the complicated terms of the company’s model.

That was a design feature, re once again  Mr Hogan.

The strike out is mine. It’s deserved.

Is it time for Texans to fire the GQP yet?

Once you have done that we can talk.