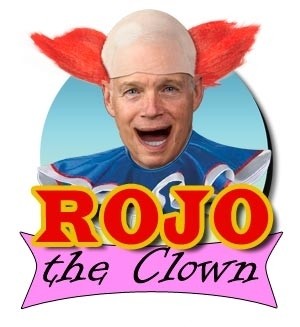 So, yeah, it’s no surprise that Johnson has already disgorged the clumsiest and dumbest post-impeachment take you’re likely to hear from anyone in Congress.

“The fact of the matter is this didn’t seem like an armed insurrection to me. I mean armed, when you hear armed, don’t you think of firearms? Here’s the questions I would have liked to ask. How many firearms were confiscated? How many shots were fired? I’m only aware of one, and I’ll defend that law enforcement officer for taking that shot.”

Really? You’re not armed unless you’re carrying a gun? Tell that to any one of the Chicagoland Chuck E. Cheeses I’m no longer allowed to set foot in.

For some reason, I happen to think bashing in a cop’s head with a fire extinguisher pretty much qualifies as “armed.” Call me crazy.

Of course, PolitiFact had a field day with this one, bestowing the rare and coveted “Pants on Fire” award on ol’ RoJ:

[N]ews reports are filled with accounts of armed people at the Capitol.

NBC News reported that within a week after the attack a dozen guns and thousands of rounds of ammunition had been found on seven people arrested before and after the Capitol riot.

Not only that, Trump hooligans were caught with all sorts of other nasty weapons:

David Blair, 26, was seen hitting officers with a lacrosse stick, NBC said. Others had pepper spray, brass knuckles, a pipe and pocket knives, and one man was carrying a “stinger whip,” a tool with blunt and whip-like edges marketed for self-defense and escaping a locked vehicle.

And then there were those pipe bombs, but why split hairs, huh?

But then if you’re trying to make your not-guilty impeachment vote seem like something other than treason, it behooves you to downplay the seriousness of what happened.

And while these 21st century revolutionaries for some reason decided to leave their muskets in their Hyundais, they nevertheless showed up prepared to kidnap and kill.

So might you want change your vote now, Ron?

(22204)
$179.00 (as of May 17, 2022 09:25 GMT -04:00 - More infoProduct prices and availability are accurate as of the date/time indicated and are subject to change. Any price and availability information displayed on [relevant Amazon Site(s), as applicable] at the time of purchase will apply to the purchase of this product.)