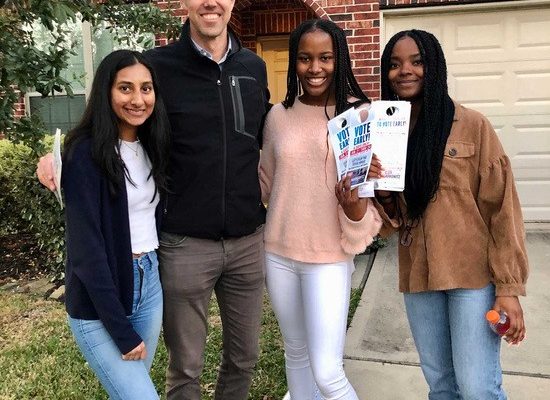 Something big happened in Texas yesterday:

“I'm joining Democrats across Texas and the country who are jumping all in for Eliz, because I know she's the fighter we need to put real change on the agenda for all Texans,” the Massachusetts U.S. senator said in a statement. “As an educator and advocate, Eliz has shown up for her community time and again. The people of Fort Bend County and the 28th District deserve a woman like Eliz in the House.”

Democrats are pushing to flip the traditionally red seat as they head toward November with hopes of capturing the House, where they are effectively nine seats away from the majority.

We’ve spent the last two weekends knocking on doors in Fort Bend county trying to help Eliz Markowitz win a special election for the state house. If she wins, she’ll be the first Democrat to represent the district in the legislature.

But more than that, a victory on January 28th will show Texas and the country that with only 8 more seats to pick up, we are going to win the State House for the first time since 2001. And it will also mean that we are poised to deliver our state’s 38 electoral college votes to the Democratic nominee who will defeat Donald Trump.

That’s how important this election is. And that’s why Powered By People has mobilized more than 950 people to block walk in House District 28 over the last two weekends. They came from Katy and Houston, Austin and Dallas, El Paso and Longview, Lubbock and San Antonio. Some even jumped on a plane to come down from outside of Texas. And so far they’ve knocked on over 24,000 doors, initiating thousands of conversations with the voters who will decide this important election.

And you know what? I think it’s working.

That means that in an election where most pundits expected turnout to drop off from November, turnout is actually FIVE TIMES what it was in November.

That’s the power of people.

Stronger than special interests or entrenched politicians, everyday Texans are taking matters into their own hands. Direct voter engagement — person to person conversations — eyeball to eyeball — more powerful than TV, or Facebook ads, or any of that phony rock 'n roll.

But we’re not done yet. We still have another weekend of action, where we hope to bring even more volunteers together to knock on doors for Eliz. And we’ll have to really step up. Texas Governor Greg Abbott is chartering buses to bring people from across Texas — with promises of free food and hotels — to try to counter our efforts.

So… no matter where you live, I really need you to help us out this weekend in Fort Bend. Our ability to win this race — and ultimately the State House — hangs in the balance. Please join our remote volunteer call team to make calls between now and Election Day (January 28th) to help get out the vote for Eliz.

And if you’d like to help fund this work, we’ll put your contributions to use helping to raise, organize and mobilize the volunteers who will do the hard work that wins elections.

Also, the LGBTQ Victory Fund is all in for Dr. Markowitz’s campaign:

Over the years, Texas has been home to some of the worst anti-LGBTQ legislation in the country. But recently, we've been chipping away at the anti-LGBTQ candidates that once had a death grip on the state House – Texas even has an LGBTQ Caucus now! This year, we're going to turn Texas totally rainbow, starting with Eliz Markowitz's special election on January 28th. Will you chip in $28 or more to help Eliz and all our LGBTQ candidates win in Texas? »

Anti-LGBTQ forces fear we're about to take back the state. They're going to throw all kinds of money at Texas to make sure we lose on Election Day. But the latest polling shows Eliz and her opponent are running neck and neck. With our support, she can win – and we can turn Texas rainbow in 2020. Chip in $28 or more to make it happen! >>

Thanks again for your support!