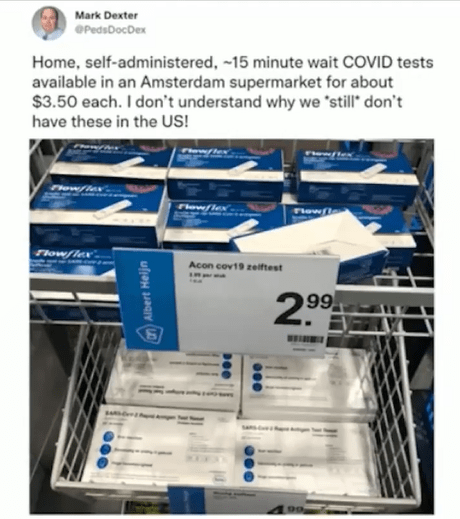 The COVID pandemic provides all the proof America needs that healthcare does not belong under the control of for-profit corporations.

COVID exposed why our system is ultimately fatal to many

We are in a global pandemic. We have various vaccines on the market. Most at some point got their genesis from public funds, our taxpayer dollars in some form.

The vaccines made by Pfizer and Moderna, which are likely to be the first to win FDA approval, in particular rely heavily on two fundamental discoveries that emerged from federally funded research: the viral protein designed by Graham and his colleagues, and the concept of RNA modification, first developed by Drew Weissman and Katalin Karikó at the University of Pennsylvania. In fact, Moderna’s founders in 2010 named the company after this concept: “Modified” + “RNA” = Moderna, according to co-founder Robert Langer.

“This is the people’s vaccine,” said corporate critic Peter Maybarduk, director of Public Citizen’s Access to Medicines program. “Federal scientists helped invent it and taxpayers are funding its development. … It should belong to humanity.”

Moderna, through spokesperson Ray Jordan, acknowledged its partnership with NIH throughout the COVID-19 development process and earlier.

Pandemics can destroy communities, societies, and countries in the aggregate. But corporations that manufacture the medicines and tools necessary to combat the pandemic have a vested interest in continuing but managing the pandemic for maximizing their profits.

It is not difficult to infer that that is exactly what is happening. As people worldwide are dying and spreading different COVID variants for the lack of vaccines, western countries are debating whether to suspend vaccine patents. In other words, they are accumulating massive profits with delays.

Negotiations between WTO member nations on the language of a waiver are ongoing and could take months. European nations have already voiced their opposition to a waiver. Germany argues that capacity and quality assurance, not intellectual property rights, are causing production restraints, while French President Emmanuel Macron has said that increasing export and production of the vaccines and their ingredients would be the best way to boost global vaccination rates. Given that the WTO is a consensus-driven body, it is difficult to predict what the actual text of any waiver would look like, although, given European opposition, it is likely to be less far-reaching than the original proposal by India and South Africa. For now, we’ll have to wait and see.

Ironically, when one examines the intellect behind the advanced technologies of the western countries, it is clear it has always been a result of people from all over the world. As such, a give-back to the world is the only moral thing to do.

The conceptual foundations of the current version of American capitalism are found in Milton Friedman’s well-titled 1970 New York Times Magazine article “The Social Responsibility of Business Is to Increase its Profits.”

Friedman meant this provocative thesis quite literally. In his view, which has since become the dominant perspective in American law and finance, corporate shareholders should be understood to own the company and its executives should be seen as their hired help. The shareholders, as individuals, can obviously have a variety of goals they favor in life. But their common goal is to maximize the value of their shares.

Therefore, for executives to set aside shareholder profits in pursuit of some other goal like environmental protection, racial justice, community stability, or simple common decency would be a form of theft. If reformulating your product to be more addictive or less healthy increases sales, then it’s not only permissible but actually required to do so. If closing a profitable plant and outsourcing the work to a low-wage country could make your company even more profitable, then it’s the right thing to do.

COVID rapid tests could save thousands of lives in the U.S because they will allow the infected to quarantine. It turns out the test can cost about 80 cents to manufacture. The United Kingdom and many other countries give it out for free. Others sell it from $1 to $3.

In the U.S., that price is between $20 and $25. Huge profits on our backs after the previous administration and its cohort criminally handled the pandemic.

I guess the corporations are doing what Milton Friedman preaches. If they don't charge whatever the market will bear, it is theft of the shareholder's gain.

It is obscene that a pandemic, your cancer cure, your diabetes treatment, or any other medical problem is dependent on maximizing the income of the few who are actual shareholders. But that is our economic system.

Remember, Trump and other bought politicians are responsible directly for the deaths of hundreds of thousands from this pandemic. Most importantly, our economic system is implicitly murderous. It forces the protagonist in this system to maximize profits at all cost, humanity, be damned.

(85731)
$0.00 (as of May 16, 2022 20:37 GMT -04:00 - More infoProduct prices and availability are accurate as of the date/time indicated and are subject to change. Any price and availability information displayed on [relevant Amazon Site(s), as applicable] at the time of purchase will apply to the purchase of this product.)