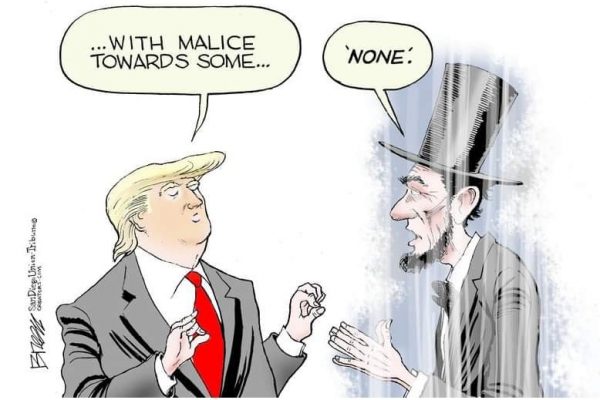 Justice gets done, despite the tweet-bleating of Trump and the intervention of Barr. The Trumpocracy’s court jester is sentenced to 40 months in prison (three years, four months, $20,000 fine, two years probation, plus community service). There will be an appeal, as well as speculation about a Trump pardon/commutation, as the news cycle has featured a pardon spree that created one among many media frames.

Trump is tweeting while StoneÃ¢Â€Â™s sentencing is in progress. If Barr doesnÃ¢Â€Â™t resign after this, he has no credibility with anyone – DOJ, courts, the public. Hard to see how he can remain in place IF he cares about DOJ & the rule of law more than power & politics. https://t.co/pGCMDH6Ai4— Joyce Alene (@JoyceWhiteVance) February 20, 2020

“Witnesses do not get to decide for themselves whether Congress is entitled to the facts.”

On Stone's defense of “So what?” judge echoes prosecutors: “Of all the circumstances in this case, that may be the most pernicious. The truth still exists, the truth still matters. Roger Stone's insistence that it doesn’t … are a threat to our most fundamental institutions”

Judge is speaking very very fast. She is STILL going through extensive record that led to Stone's conviction on ALL counts before a jury.

Why is the identity of the person who wrote the Roger Stone sentencing memo such a big secret? Did Barr write it himself? https://t.co/Q3yLpVwFpA

Scene from the Roger Stone sentencing: Milo Yiannopoulos was thrown out of the court overflow room because he was nodding off and appears to have been falling asleep

After AG Barr told the world the first sentencing recommendation for Stone was grossly out of whack, his prosecutorÃ¢Â€Â”the guy who replaced the guys who quit in protestÃ¢Â€Â”argued today for all the enhancements that bump the sentence as high as 9 years. That looks like a revolt.

Many young GOP staffers will watch todayÃ¢Â€Â™s Roger Stone sentencing. Is it ok to lie in politics? Lie to law enforcement? Tamper with witnesses? Do we want an ethical GOP? Or thousands of mini Roger Stones in our party? Honesty and ethics need to count.

Why was the meeting between judges postponed? They were supposed to meet yesterday to discuss the danger Barr/Trump are causing and without explanation the meet gets cancelled https://t.co/p622hNQCx0

The prosecutors who helped convict Blagojevich issued a stern statement in response to the commutation, noting that Blagojevich extorted the CEO of a children's hospital, withholding funds for sick children until he issued campaign contributions. https://t.co/GTRHxluwwm

18. Trump commuted the sentence of Judith Negron, who was convicted of a $205 million Medicare fraud scheme and money laundering.

Rohrabacher in 2017 about the possibility of Assange being pardoned in exchange for providing information exonerating Trump and Russia:

“It's a confidential interaction now with myself and the White House to determine what can be offered.” https://t.co/kgQQ2eo4pm

Stone is being chained directly to Assange here. It was THE REASON he lied to Congress. Assange's extradition is even more important now, because if he flips, or the DoJ produces evidence implicating Trump's team to Assange, they all fall

(22195)
$179.00 (as of May 17, 2022 00:29 GMT -04:00 - More infoProduct prices and availability are accurate as of the date/time indicated and are subject to change. Any price and availability information displayed on [relevant Amazon Site(s), as applicable] at the time of purchase will apply to the purchase of this product.)