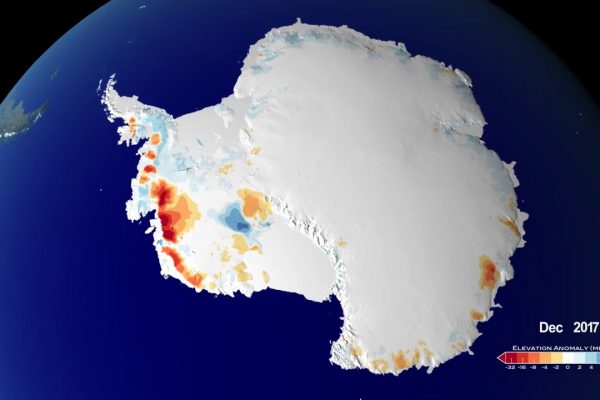 “Ice shelves are the most vulnerable parts of Antarctica’s ice sheet system and we know that they are shrinking, but what we didn’t know before this work was how that was impacting the grounded ice behind them.” Helen Amanda Fricker, Scripps Institution of Oceanography.

Disheartening news out of Antarctica, once again, as researchers found the “first physics-based quantifiable evidence that thinning ice shelves in Antarctica are causing more ice to flow from the land into the ocean”. In other words, ice shelf buttressing is no longer a guarantee to protect us from land ice. The marine extensions of the glacier does not raise sea levels as it is already floating in the water. It is the land ice that will flood some of the most populous areas on the planet. This is all happening faster than predicted.

Research published in Geophysical Research Letters found significant changes in ice shelf loss. The shelves underbellies are being carved by upside rivers of warm ocean water which find the weakest part of the shelf causing fracturing and, inevitable cracking and, calving of enormous icebergs.

The research is summarized by the authors:

The Antarctic Ice Sheet is currently losing mass but the causes for the mass loss remain unclear. It has been suggested that reduction in the thickness of the floating ice shelves that surround the ice sheet, for example due to ocean warming or changes in ocean circulation, may be responsible for some of the observed ice loss. However, this hypothesis has remained untested. Here we use a state‐of‐the art numerical ice‐flow model to calculate the direct mass loss due to observed changes in ice shelves between 1994 and 2017. We find that the magnitude and spatial variability of modelled changes are in good agreement with observations, suggesting that thinning ice shelves have driven a substantial portion of the recent ice‐loss of the Antarctic ice sheet. The process we consider (ice‐shelf buttressing) relates to changes in forces within the ice alone and is therefore effectively instantaneous (i.e. only limited by the speed of stress transition within the ice). Besides providing a possible explanation for a large part of the ongoing mass loss, this finding also shows that we are not protected against the impact of the Antarctic Ice Sheet on global sea levels by a long response time.

It’s important to note that “Antarctica experienced a sixfold increase in yearly ice mass loss between 1979 and 2017, according to a study published in the Proceedings of the National Academy of Sciences”.

Below is a stunning video by Nasa’s Scientific Visualization Center. The red is loss of land ice and, blue is ice gain. West Antarctica alone holds 11 feet of sea level rise if it was all to melt. East Antarctica has begun to lose ice as well.

Hilmar Gudmundsson, Professor of Glaciology and Extreme Environments, led the study. He said there has been a long-standing question as to what was causing the changes we have observed in land-based ice over the last 25 years, and that while the thinning of the floating ice-shelves had been suggested as a reason, the idea had never been put to the test before now.

The models agree with observations of ice mass loss the authors found.

“There are other processes in play as well, but we can now state firmly that the observed changes in ice-shelves do cause significant changes over the grounded ice, speeding up its flow into the ocean.”

A critical element of the findings was the speed at which the ice flowed from the sheet into the ocean as a result of the thinning ice shelves.

“One of the most important lessons from this study is that the impact is felt without any delay,” said Professor Gudmundsson.

“Generally, we distinguish between an instantaneous response or a delayed, transient response. Our study shows the thinning of the ice shelves results in a significant instantaneous response to ice flow and ongoing mass loss. This means that we are not protected against the impact of the Antarctic Ice Sheet on global sea levels by a long response time.”

The Antarctica has started to melt at surface!! According to MAR (@c2kittel) forced by GFS, surface melt over Nov 2019 has been the highest from 1979 as a likely consequence of the recent polar vortex crash … resulting from Global Warming! Follow https://t.co/L5URXyvHrw pic.twitter.com/BZvCFXXgrn

Fernando Paolo, postdoctoral scholar at Jet Propulsion Laboratory/California Institute of Technology, added: “It is striking how far inland the changes in ice shelves can impact the ice sheet flow. Since we now know that shrinking ice shelves are directly responsible for increases in ice discharge to the ocean, it is important that we keep monitoring them to watch how they evolve.”

The impact of Antarctica’s thinning ice shelves from Northumbria University on Vimeo.

(22195)
$179.00 (as of May 16, 2022 23:41 GMT -04:00 - More infoProduct prices and availability are accurate as of the date/time indicated and are subject to change. Any price and availability information displayed on [relevant Amazon Site(s), as applicable] at the time of purchase will apply to the purchase of this product.)