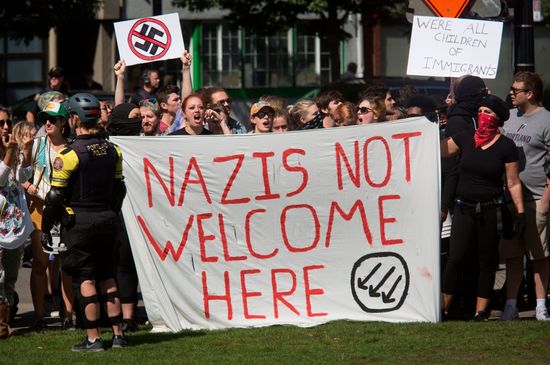 Horst Wessel 2.0 wants to sell you some brown shirts.

RW writer/propagandist Andy Ngo, agent provocateur on the side of numerous RWNJ groups like Proud Boys came to the Heritage Foundation in DC to spin a tale of imaginary left-wing violence.

The hope is to support special speech rights for neo-nazi, white supremacist nationalism, and the myth of some ubiquitous left-wing violent movement monolithically referred to as “antifa”.

This is part of a drive by numerous RWNJ groups to foment campus violence and recruit right-wing political activity in the name of an imaginary suppression of conservative speech rights.

Red-baiting like this continues because there’s all that “socialism” what needs to be suppressed, somehow a threat to the much larger incidence and numbers involved in American RWNJ domestic terrorism.

From Portland to Washington D.C., a far-left revolutionary movement calling itself “Antifa” has organized mass violence on the streets of major American cities. Infamous for dressing head-to-toe in black, Antifa militants organize to destroy property, beat people, and intimidate their opposition into silence—all in the name of fighting “fascism.” Despite its well-documented track record of violence, Antifa still finds support on the Left and its leaders continue to skirt justice.

Andy Ngo is a Portland-based journalist who is known for his reporting on Antifa. He has been published in the Wall Street Journal, National Review and the New York Post and he formerly served on the editorial team of Quillette magazine. In June, Ngo survived a mob beating by Antifa in Portland.

If you’re in the mood for a master class in gaslighting, Heritage Foundation is hosting a presentation called:

“Behind the Mask: Antifa’s Plan to Undermine Liberal Democracy”

Featuring Andy Ngo and attended by other prominent Nazi propagandists.

One of the most active trolls in the tweets I captured in May 2019 that mentioned @EoinLenihan is back. Since the account was created in April 2019 they tweeted 26.9K tweets and most used HT is Antifa. They RT Andy Ngo a lot too. I blocked, recommend to not engage w/ them. pic.twitter.com/ixS5Bz1OoZ

In the hours and days following the deadly “Unite the Right” rally on 12 August 2017, President Donald Trump laid the blame for the violence that took the lives of three people in Charlottesville, Virginia on “many sides.”

The claim that white supremacists and counter-demonstrators carry equal responsibility for the weekend melee in Charlottesville has been widely rejected — both Democrat and Republican lawmakers have repudiated the views espoused by rally attendees who were seen using racist and anti-Semitic epithets and carrying Nazi symbols. But the president’s comments have drawn attention to far left demonstrators known as “antifa” (short for anti-fascist), who have been showing up to counter white supremacist rallies, sometimes violently).

Even though the people who died amid the unrest have not been linked to antifa (the other two victims were police officers), questions have since been raised about the violence at the weekend rally and further potential for violence at upcoming events by both the alt-right (a term that encompasses different strands of white supremacist factions) and the antifa activists who come out to meet them. Experts tell us that statistically, historically, and in terms of philosophy the alt-right poses a bigger threat and greater evil, but the violence at political demonstrations has been ratcheting up in recent months.

(28)
$19.99 $9.99 (as of May 19, 2022 04:38 GMT -04:00 - More infoProduct prices and availability are accurate as of the date/time indicated and are subject to change. Any price and availability information displayed on [relevant Amazon Site(s), as applicable] at the time of purchase will apply to the purchase of this product.)