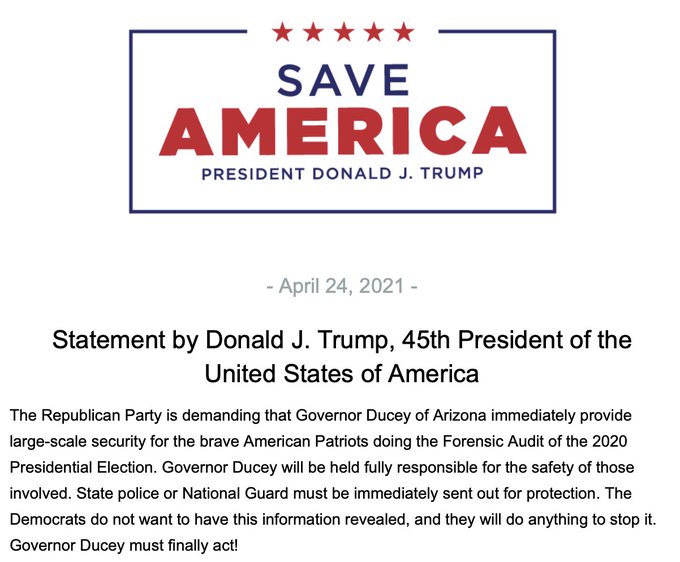 Francisco Franco is still in Madrid waiting for his COVID shot, but previous guy seems full of the usual disinformation. He’s drawing attention away from his failure in Georgia and trying the same scam in Arizona, only this time, it’s “a group of conspiracy theorists running a sham audit.” Apparently election audits can be privatized in the post-Trump era.

An extensive effort to recount ballots from the November election moved forward in Phoenix on Friday as a private vendor hired by Republicans in the Arizona Senate began reviewing nearly 2.1 million ballots cast in the state’s largest county.

The recount of the ballots from Maricopa County was sought by Senate Republicans to examine unsubstantiated claims that fraud or errors tainted President Biden’s win.

Election officials and the courts have found no merit to such allegations, and the GOP-led county board of supervisors has objected to the recount.

… journalists wishing to observe would be required to sign up to work a six-hour shift as an official audit observer and would not be allowed access to any recording device — even paper and pencil — to document what they saw.

On Friday, a reporter for The Washington Post who had not signed up for a shift was escorted from the arena grounds by private security.

A live stream of the Arizona audit — showing footage from nine continuously operated cameras offering different views of the arena — is being provided by One America News, a right-leaning news outlet that has featured claims that the November election was fraudulent.

On Saturday, in a flurry of new press releases, former President Donald Trump praised a taxpayer-funded effort by Arizona legislature Republicans to “audit” the results of the 2020 election in Maricopa County, and demanded that Republican Gov. Doug Ducey send in the state police or the National Guard to “protect” the pro-Trump technology company tasked with carrying out the effort.

Trump's ranting swiftly earned him a round of mockery from commenters on social media, many of whom noted the futility of the Arizona GOP's exercise and the former president's ongoing unwillingness to admit that he lost the presidential election legitimately.

A Section of #Trump Border Wall in South Texas Cost $27 Million a Mile. It’s Being Foiled by $5 Ladders. https://t.co/6D3gv8JS4e