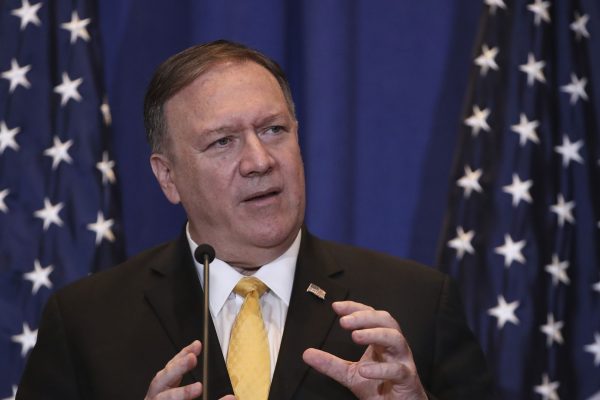 SoS Pompeo claimed on the Sunday shows this morning that the Iraqi people want our troops to stay and help them fight terrorism: Pompeo dismisses Iraqi leader’s call for all foreign troops to leave

Secretary of State Mike Pompeo on Sunday dismissed calls by Iraq’s caretaker prime minister for a timetable for all foreign troops to exit the country, in the wake of a U.S. strike that killed top Iranian military commander Qasem Soleimani, arguing that the Iraqi people want the United States to remain and continue the fight against terrorism.

He called Mahdi an “acting prime minister” (which is beyond ironic, given the number of acting officials in the IMPOTUS administration), and…

Pressed by host Chris Wallace on what the United States will do if the Iraqi parliament demands that American troops leave the country, Pompeo declined to say.

“We’ll have to take a look at what we do when the Iraqi leadership and government makes a decision,” he said. “But the American people should know we’ll make the right decision. We will take actions that, frankly, the previously administration refused to take to do just that.”

Well, the Iraqi leadership made a decision: Iraqi parliament passes resolution calling for US troops to be expelled

Iraq’s parliament passed a resolution Sunday calling for the government to end the presence of foreign troops in the country in the wake of a U.S. airstrike that killed a top Iranian general.

The resolution asks Iraq’s government to cancel the request for assistance from the U.S.-led coalition operating in the country against the Islamic State.

“The government commits to revoke its request for assistance from the international coalition fighting Islamic State due to the end of military operations in Iraq and the achievement of victory,” the resolution read.

The resolution is non-binding, but it was taken at the prime minister’s urging, so there’s not much chance he’ll ignore it. Iraq’s prime minister says ‘urgent measures’ should be taken to remove foreign forces

In an address to the legislature, Prime Minister Adel Abdul Mahdi recommended that the government establish a timetable for the departure of foreign troops, including the members of the U.S.-led coalition to fight the Islamic State, “for the sake of our national sovereignty.”

OK, Pompeo. They’ve made a decision. Still think they want us to stay?

(33002)
(as of May 19, 2022 03:11 GMT -04:00 - More infoProduct prices and availability are accurate as of the date/time indicated and are subject to change. Any price and availability information displayed on [relevant Amazon Site(s), as applicable] at the time of purchase will apply to the purchase of this product.)