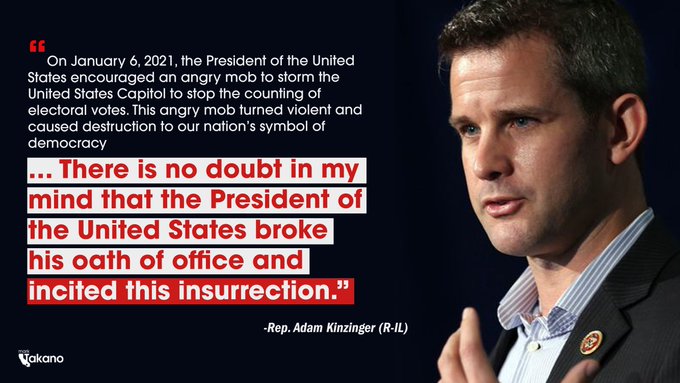 A majority of people polled want Trump convicted in the upcoming Senate impeachment trial, as pressure is being applied to GOP senators.

A Republican group plans to run ads in the home states of nearly two dozen GOP senators during next week’s impeachment trial, pressuring them to vote to convict former President Donald Trump and bar him from holding office again.

Here's the ad that will run in @LeaderMcConnell's home state of Kentucky on Fox News.

21 other GOP senators will have similar ads running in their home states.

The Republican Accountability Project is spending a half-million dollars on television advertisements that will begin airing on Fox News starting Monday and are aimed at 22 senators the group views as potential votes for conviction. The group has pledged to spend $50 million defending GOP lawmakers who cross Trump.

Senate Minority Leader Mitch McConnell, R-Ky., who has signaled he is open to convicting Trump but recently voted along with 44 of his GOP colleagues to dismiss the trial as unconstitutional, is among the lawmakers featured in the ads.

Half of Americans polled for a new survey said former President Donald Trump should be convicted in a Senate impeachment trial next week over his incitement of a riot at the U.S. Capitol last month, according to a new poll from Quinnipiac University.

The nationwide survey found that 50 percent of respondents believe Trump should be convicted and 45 percent believe he should not be convicted, with most participants answering along party lines.

“In the eyes of history, Trump’s acquittal will convict those who failed to summon the courage to find him guilty.”

To those who vote to acquit, I say:

I pity you all:

You have sold your souls for a mess of pottage. https://t.co/ryesHWGPpl— Laurence Tribe (@tribelaw) February 5, 2021

In the eyes of history, Trump’s acquittal will convict those who failed to summon the courage to find him guilty. The dodge that the Senate lacks jurisdiction is just that — a dodge, a procedural escape hatch to avoid the politically perilous but morally essential duty to declare that Trump’s crusade to obstruct the peaceful transfer of power constituted the ultimate high crime.

Acquittal, even if it is based on jurisdictional grounds, risks legitimizing Trump’s conduct, setting a precedent detrimental to the rule of law. Conviction, if it were somehow miraculously to occur, would risk turning him into a martyr, allowing him to claim that he was persecuted by political enemies even after he was out of office.

Dropping the matter would be worse. It would represent an enormous collective shrug at Trump’s abuses. “If provoking an insurrectionary riot against a Joint Session of Congress after losing an election is not an impeachable offense, it is hard to imagine what would be,” the House impeachment managers write.

Convicting and barring Trump from holding future office isn’t just a response to Jan 6th. It’s making sure he never has the chance to bring corruption back into the White House and that any future president knows that they can’t get away with the same behavior.— Citizens for Ethics (@CREWcrew) February 3, 2021

I suspect the reason the entire GOP is backing up Marjorie Taylor Greene is that she was a useful idiot for certain tasks during the January 6 coup, and they want her loyal – and silent, if the FBI calls.— Eric Garland (@ericgarland) February 5, 2021

Trump sent the mob of domestic terrorists to the Capitol to stop the Electoral vote count. We must never allow that to happen again, and that begins with convicting Trump. GOP Senators MUST uphold their oath, or they are as traitorous as they are hypocritical. pic.twitter.com/2BCRg46AX3

….Trump and Giuliani probably understood that the potential for their work to scuff up Biden was much greater than its potential to harm them, for the simple reason that there was only so much incremental damage yet another Trump scandal could do, whereas Biden had a pretty clean image that could be seriously tarnished if they got the mainstream media to treat their allegations seriously.

But impeachment created a five-month-long national tutorial in Trump’s plans to force Ukraine to help his campaign. It even got large numbers of Republican officials to concede that his scheme to use his presidential authority to conscript Ukraine into his opposition research operations was bad (even if none of them save Mitt Romney thought it was bad enough to remove him from office.)

And so when Giuliani finally produced the October Surprise, the media had been well schooled. Reporters knew that Joe Biden had fired ineffectual Ukrainian prosecutor Viktor Shokin as part of an effort to clean the country up, rather than as a favor to his son. They knew Trump’s own cronies were engaged in the very scam (using their power to skim money out of the Ukrainian energy sector) they were accusing Biden of trying. The Treasury Department even felt compelled to identify Andrei Derkach, Giuliani’s partner, as an active Russian agent.

Would all of this have occurred without impeachment? Would any of it? Or would the press corps instead have magnified Trump’s insinuations, wondering aloud if Biden’s call to fire Shokin was fishy, and letting Trump’s cooperation with Russian agents just slide into the background?

There’s no way to know how the Biden story would have played out or what difference it would have made to the outcome. But the margin in the decisive states was very close, even if the national vote was not. Impeaching Donald Trump for the crime of using his office to smear Joe Biden might well have enabled Biden to beat him.

(21901)
(as of May 18, 2022 03:57 GMT -04:00 - More infoProduct prices and availability are accurate as of the date/time indicated and are subject to change. Any price and availability information displayed on [relevant Amazon Site(s), as applicable] at the time of purchase will apply to the purchase of this product.)