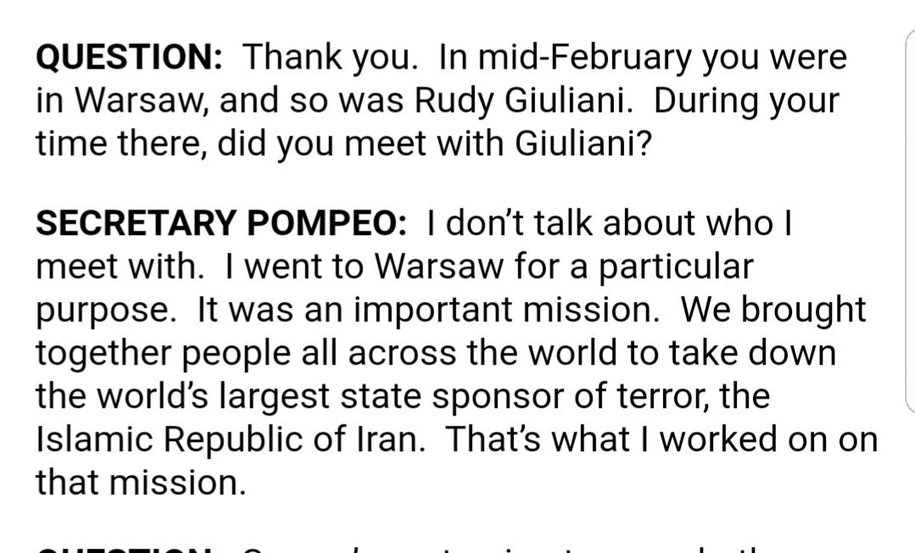 Mike Pompeo was being lobbied to remove Ambassador Yovanovich by the two men arrested this week trying to flee the country. The recall of Ambassador Yovanovich included one route to Mike Pompeo through Pete Sessions (R-TX). It was an extensive, coordinated effort culminating in the Arms for Dirt threat. Anne Applebaum writes a related column today.

Whether you are a Democrat or Republican, a pro-Trumper or a never-Trumper, an inhabitant of a blue state or a red state, you owe it to yourself and your country to read the text of the statement prepared for Congress by former ambassador Marie Yovanovitch. If you care about the Constitution, if you feel any fealty to the ideas and ideals that have shaped U.S. foreign policy for the past century, then you will find it deeply disturbing.

… Foreign interests — specifically, the interests of Fruman and Parnas, who have just been indicted on a charge of conspiring “to circumvent the federal laws against foreign influence” — not only sought the removal of a U.S. ambassador; they sought, successfully, to distort and undermine U.S. foreign policy, to undermine our decades-long push for rule of law in Ukraine. A couple of weeks ago, I wrote that Trump and Giuliani “set out to undermine every U.S. and European program in the region, every diplomatic and educational initiative, every single ideal that the United States has ever stood for in that part of the world.” But now I see that the situation was far worse than that. Not only was Trump pursuing conspiracy theories in Ukraine; not only did he want the Ukrainian government to launch a fake investigation into one of his rivals; not only did he seek to exercise political influence on another country’s judicial system; he was, in addition, doing all of this at the behest of Giuliani, in Giuliani’s direct personal, financial interests.

The implications of this story are immense. If U.S. foreign policy is now for sale — then how many other people are out there trying to buy it? Yovanovitch sums this up as well as anybody could. “The harm will come,” she writes, “when bad actors in countries beyond Ukraine see how easy it is to use fiction and innuendo to manipulate our system.” How sure are we that there were no private interests at stake when Trump promised Turkish President Recep Tayyip Erdogan he could invade northern Syria? Can we be certain there are no private interests shaping the United States’ relationship with Russia or Saudi Arabia? The answer is no, no and no. This is the most corrupt White House in modern U.S. history, and we cannot be sure of anything at all.

Thinking he was getting softball questions from a local reporter, Pompeo tried to bully her when she asked some pointed questions related to the Arms for Dirt scandal.

Pompeo wouldnÃ¢Â€Â™t tell Nashville reporter whether he met with Giuliani in Warsaw earlier this year. Instead the Secretary of State berated the reporter. https://t.co/SniNIKCYU7

Pompeo probably wasn’t briefed about Kurds in the US.

Amons asked Pompeo what his message would be to the #Kurds in Nashville who are worried about their families in Syria. Nashville has the largest Kurdish population of any American city.

Grateful that my call as a Christian to protect human dignity overlaps with America's centuries-old commitment to the same in our foreign policy. Dedicated to ensuring our diplomacy pursues this mission and guards our proud history of honoring and defending #religiousfreedom. pic.twitter.com/IZLFY3ECeY

Commander of Kurdish forces in #Syria to US official:

“I need to know if u are capable of protecting my people, stopping these bombs falling on us or not… If not, I need to make a deal w/Russia & regime now & invite their planes to protect this regionÃ¢Â€Âhttps://t.co/WmhracL2qs

From my recent article:
Russian state media: “after being Ã¢Â€Âœstabbed in the back by the Americans,Ã¢Â€Â the Kurds have nowhere else to turn except to Russia… the U.S. is abdicating its influence in the Middle East, Russia is readily stepping into the void.” https://t.co/2MLqEJIKvn

Karen Pence told women not to be afraid to “get on their knees” for Trump.

Leaving the nation in a constitutional crisis and our allies in the Middle East under attack, lazy #NoNothingDonald goes golfing today. Again. pic.twitter.com/TQnBDl0qbY

Another tweet while on the road to the golf course.

Ã¢Â€ÂœTheyÃ¢Â€Â is your own Justice Department.

(43199)
$0.00 (as of May 20, 2022 09:08 GMT -04:00 - More infoProduct prices and availability are accurate as of the date/time indicated and are subject to change. Any price and availability information displayed on [relevant Amazon Site(s), as applicable] at the time of purchase will apply to the purchase of this product.)