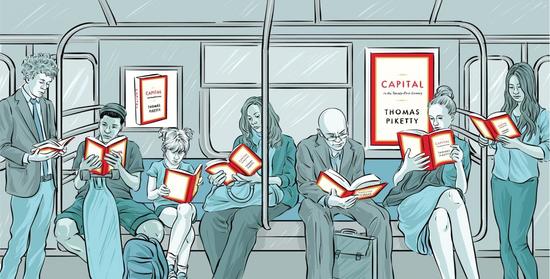 Thomas Piketty’s new book, emphasizes the role of ideology in preserving and challenging capitalism even as “multigenerational wealth transfers, combined with high rates of return on capital, will inexorably create an uberrich capital class.”

George Eaton’s article in New Statesman has some useful and current observations.

“The key point is that there are no deterministic economic, technological or cultural forces that make societies more unequal or more equal than others,”

As part of what he calls “participatory socialism”, Piketty advocates policies including income and property tax rates of up to 90 per cent, a public inheritance of €120,000 (£102,000) for every 25-year-old, and a cap of 10 per cent on shareholder voting power.

In the postwar Keynesian era, Piketty writes, when the US and the UK levied tax rates of up to 98 per cent, economic growth was higher and income inequality lower. Are such policies feasible in an age of globalisation and hypermobile capital? Piketty’s response was to reject the status quo. “Well, that’s a choice, whether we organise capital controls or not. Some governments, including in the US and the UK, propose to control the movement of people, to control immigration. I prefer to control capital than to control people.”

He added: “The view that you can make a fortune in a country by using the public education system and the public infrastructure, and then you have a sacralised right to click a button and transfer the wealth somewhere else, and nobody can track you down, there is nothing natural in this process. It’s a very sophisticated legal system that made this possible.”

Piketty is also consoled by the widening of “the Overton window” – the spectrum of policies deemed acceptable by voters and the political class. Only four years ago, he was struggling to persuade Democratic presidential candidate Elizabeth Warren of the merits of a wealth tax during a debate in Boston (Warren now supports an 8 per cent rate).

We've already mentioned that. But tell us about your wealth tax proposal. Because in the book it comes it comes out as pretty draconian. You have tax rates going up to 90% in a proposal.

THOMAS PIKETTY: Yes, actually this has been done in the past,actually. It is exceptional wealth taxes. For instance, after World War II in Germany or Japan, in order to reduce very large public debt of the time, there was progressive tax up to 90% and very large wealth spots for you.

And these worked pretty well, because it allowed these two countries, Germany and Japan to reduce very fast their public debt, and then to invest in public infrastructure, education in the '50s, '60s. And I think this was a large success. Now, it depends, of course, on the level of wealth at which you do that.

You know, if you tax 90% someone who owns the entire world, you know, you would still own 10% of the world, which is a lot. So it's all– we have to discuss. So to put concrete numbers, I use in the proposal, I use the proceeds of the annual wealth tax, and of the tax entirely to finance a system of inheritance for all, where everybody at age 25 would receive 120,000 euros.

Now in your system proposal, people will now receive 0, would receive 120,000. This is about–

MARTIN SANDBU: As a one-off payment at age 25.

THOMAS PIKETTY: Like inheritance. And so people who used to receive zero will receive 120,000. That's about half of the population would receive close to zero. People today would receive 1 million after the tax everything, they would receive 620,000.

So you know, this is not complete equality. And if you want my opinion, I think we could go further than that. But I think what's important is that poor children, or children of the middle class, and the lower middle class also have good ideas to create firms. And you can also buy an apartment.

And I think property is also a way to change the power structure in society. And to give more bargaining power to people so that they can better choose which job, and which wage, to accept. And this is away to allow more people to participate in the economy in a way where you can make plans.

And I think this is really what we need. I think the level of inequality we have today is not only unfair, but it's so not efficient for the working of our economy, where we live in very educated societies, and we need you know broad participation by a very large group.

And the ideology that we see as today that more concentrated power, and more concentrated ownership is always good. And no matter what the number of zeros for the millionaire, who else, it's always–we should always keep it like that, I think is not convincing.

Thomas Piketty on why we need a radical new wealth tax I FT https://t.co/hIsDpPR0qu via @YouTube

The real bifurcated problem for centrists could be connecting with “nothing in-between”. Salon’s Keith Spencer chides Democrats for not paying attention to Piketty.

Thomas PIketty, Brahmin Left vs Merchant Right: Rising Inequality & the Changing Structure of Political Conflict, (Evidence from France, Britain and the US, 1948-2017)

“high-education elites now vote for the 'left', while high-income/high-wealth elites still vote for the 'right' (though less and less so),”

Yet ironically, it is now the Democratic Party that is wantonly ignoring mounds of social science data that suggests that promoting centrist candidates is a bad, losing strategy when it comes to winning elections. As the Democratic establishment and its pundit class starts to line up behind the centrist nominees for president — like Joe Biden and Pete Buttigieg — the party's head-in-the-sand attitude is especially troubling.

The mounds of data to which I refer come from Thomas Piketty, the French political economist who made waves with his 2013 book “Capital in the Twenty-First Century.” This paper, entitled “Brahmin Left vs. Merchant Right: Rising Inequality & the Changing Structure of Political Conflict,” analyzes around 70 years of post-election surveys from three countries — Britain, the United States and France — to comprehend how Western politics have changed in that span. (Note: I wrote about this paper in Salon last year in a slightly different context, before the 2020 Democratic Primary really got going.)

The reason is that nominating centrist Democrats who don't speak to class issues will result in a great swathe of voters simply not voting. Conversely, right-wing candidates who speak to class issues, but who do so by harnessing a false consciousness — i.e. blaming immigrants and minorities for capitalism's ills, rather than capitalists — will win those same voters who would have voted for a more class-conscious left candidate. Piketty calls this a “bifurcated” voting situation, meaning many voters will connect either with far-right xenophobic nationalists or left-egalitarian internationalists, but perhaps nothing in-between.

Piketty’s own view of Sanders in 2016 is prescient.

Sanders makes clear he wants to restore progressive taxation and a higher minimum wage ($15 an hour). To this he adds free healthcare and higher education in a country where inequality in access to education has reached unprecedented heights, highlighting a gulf standing between the lives of most Americans, and the soothing meritocratic speeches pronounced by the winners of the system.

Meanwhile, the Republican party sinks into a hyper-nationalist, anti-immigrant and anti-Islam discourse (even though Islam isn’t a great religious force in the country), and a limitless glorification of the fortune amassed by rich white people. The judges appointed under Reagan and Bush have lifted any legal limitation on the influence of private money in politics, which greatly complicates the task of candidates like Sanders.

However, new forms of political mobilization and crowdfunding can prevail and push America into a new political cycle. We are far from gloomy prophecies about the end of history.

(28)
$19.99 $9.99 (as of May 19, 2022 07:44 GMT -04:00 - More infoProduct prices and availability are accurate as of the date/time indicated and are subject to change. Any price and availability information displayed on [relevant Amazon Site(s), as applicable] at the time of purchase will apply to the purchase of this product.)