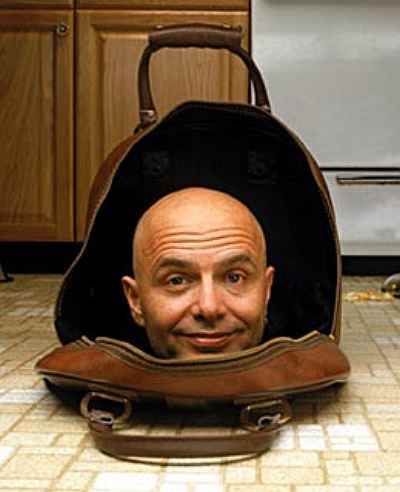 Welcome to The Sopranos

Ya gotta problem with Ralphie Cifaretto ???

Tony went over to Ralphie's house and murdered him. Put his head in a bowling bag. Emotionally trying. for the both of them, dontcha know.

Tony: You know where I was yesterday when you called?… I was outside a whorehouse, while a guy that works for me was inside beating the shit out of a guy that owes me money. Broke his arm. Put a bullet in his kneecap.
Dr Melfi: How'd that make you feel?
Tony: Wished it was me in there.
Dr Melfi: Giving the beating or taking it?

For Geller, attracting ISIS attention looks to be a mix of giving shxt and taking a chance on getting whacked.

Off With Her Head

This is funny. PC be damned. It's Red Queen stuff. The image that stands out is Pam's head in that bowling ball bag getting carried around all over Jersey. She's still talking. Still ranting about the Quran.

If this is antisemitic because Crazy Pam is ethnically Jewish, so be it.

For contrast here's another gal's serious response to the Charlie Hebdo killings:

No connection to Geller. That's thoughtful. Geller's stuff is the opposite to thoughtful.

On the Sopranos side of the image, Tony S. murders Ralphie Cifaretto in his own kitchen then stuffs his head in the bowling bag. The bag then goes on an extended journey. Attains a life of its own. That bowling bag should have appeared in the credits.

ISIS has orders out to behead Pam Geller.

Big whoop. This is her dream. Her raison d'etre is attracting attention.

One mystery is what ISIS want to do with her head. Putting her in that bowling bag Sopranos-style is possible. Why not?

If someone's reading this at Raqqa, Syria, please ask. (Does the replacement Caliph have a bowling bag? Start there.)

♣   “(Barack) Hussein (Obama) is a muhammadan. He's not insane … he wants jihad to win” at her AtlasShrugs.com blog

♣   “This is Sharia going global. They are using local Muslims the world over to demand Sharia adherence by corporations and by the market place.” On her blog

♣   “Anders Breivik (killed young people who would have grown up to become members of a political party) responsible for flooding Norway with Muslims who refuse to assimilate, who commit major violence against Norwegian natives including violent gang rapes, with impunity, and who live on the dole.” On her blog

♣   “Here’s the thing: there are no “lone wolves” in the jihad war. There are millions of Muslim soldiers all over the world who are all following the same playbook, the Quran… and the same ideology – Islam” on her blog

♣   “Why isn’t the Obama administration protecting Americans? Why is he providing cover for savages hellbent on destroying American freedoms and those who stand for it? Why is he importing hundreds of thousands of Muslims from jihad nations?” on her blog

She is on the No Entry list at the United Kingdom. That's for consorting with hate groups and participating in activities that generate recruitment materials of terror organizations.

Geller is perfect for ISIS recruitment. Couldn't be better. Pam takes pancake makeup well, looks presentable at head-and-torso range for Fox News. Ailes has her on repeatedly working the “9/11 Changed Everything” meme, damning Muslims for everything from the Ramadan fasts to mandatory charity for their wealthy.

“Stash” is your biggest supporter.

I'd like to take it seriously that ISIS is a threat to assassinate and behead Geller. That she is in grave danger. That international Sharia minions are running around sniffing for The Pam.

But for me, at least, she's made herself a joke. Dangerous to bystanders, but a joke. How can I take her plight seriously?

Trying to create another “Charlie Hebdo” incident in Texas ended up getting two other loons killed. That could just as easily have killed a dozen Texans, if those two had carried out a competent attack.

How do I not feel this situation like it is a Loonville Cartoon ???

Got a bowling bag joke? Connect up the Sopranos and Pam Geller? Put it to comments.

“It's me !!” is a sensible punch line. Extra credit for wiring in Johnny Sack and Paulie !!

Something good pops up, I'll pop for a suitable reward !!