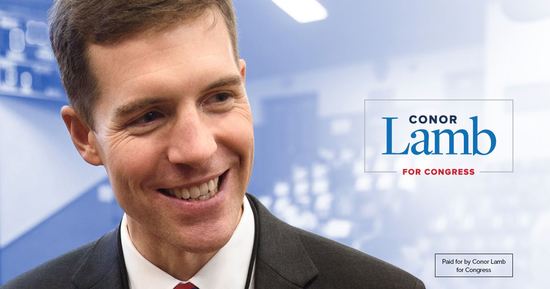 Republican super PACs are already spending big to try to stop him from going 3-for-3. One super PAC just spent at least $85,000 on attack ads targeting Conor, with more sure to come, and President Trump himself tweeted support for Conor's opponent.

Conor's not taking anything for granted after winning two tough races back-to-back — and neither can we.

Congressman Conor Lamb is counting us to help protect our Democratic majority in the House. Will you chip in before Tuesday's midnight deadline?

There's no question about it: Conor is a fighter.

Conor has spent years serving the people of Pennsylvania, first as a captain in the Marine Corps, then as a federal prosecutor based in Pittsburgh. At 35 years old, he's done more for this state than many will accomplish in a lifetime.

He's been an important ally to working families in Pennsylvania and across the nation, and a partner for Bob in Washington, but with big-money special interests already attacking him on the airwaves, he needs our help.

Before Tuesday's critical end-of-year deadline, chip in $5 — or whatever you can — to help Conor Lamb fight the smears and keep fighting for us.

Thanks for doing your part,