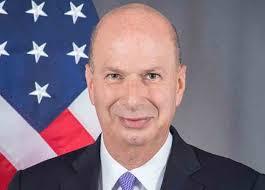 A new article describes the trial ballooning of GOP narratives that would try to divert the impeachment and pin the crime on someone, anyone else.

No one seems to fit even as Sondland, Mulvaney, and Giuliani appear on a short list to not make Trump guilty of bribery, extortion, or abuse of power for personal gain.

House Republicans’ latest plan to shield President Trump from impeachment is to focus on at least three deputies — U.S. Ambassador to the European Union Gordon Sondland, Trump’s lawyer Rudolph W. Giuliani, and possibly acting White House chief of staff Mick Mulvaney — who they say could have acted on their own to influence Ukraine policy.

All three occupy a special place in the Ukraine narrative as the people in most direct contact with Trump. As Republicans argue that most of the testimony against Trump is based on faulty secondhand information, they are sowing doubts about whether Sondland, Giuliani and Mulvaney were actually representing the president or freelancing to pursue their own agendas. The GOP is effectively offering up the three to be fall guys.

Since House Speaker Nancy Pelosi (D-Calif.) initiated the impeachment inquiry Sept. 24, congressional Republicans have struggled to come up with a consistent and coherent explanation for why Trump tried to coerce a foreign leader to investigate the president’s domestic political rivals.