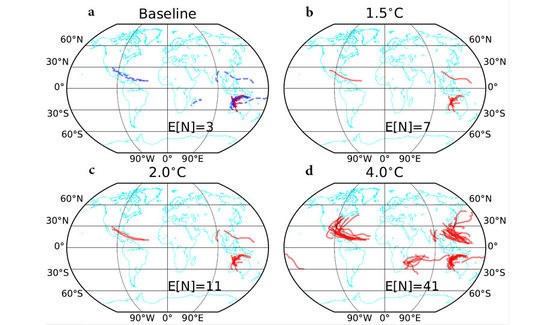 Off the northwestern coast of Africa is a volcanic archipelago that is called Cape Verde (the islands are an independent nation). It is here where Cape Verde cyclones form in the Atlantic, usually around early August.

These monster storms have a bone-chilling reputation for striking the Caribbean and the eastern coast of the United States.  The windstorms get so powerful because they “develop so far to the east and can travel over a large area of warm, open ocean waters that help power them. There are also no landforms in the way to slow tropical cyclones if they form near the Cape Verde Islands”.

Climate change impacts are intensifying the power of the tropical cyclone’s multiple weapons due to increasing amounts of warm, moist air from the ocean surface into the atmosphere.

One of the cyclones many weapons is heat and humidity when the storm approaches land, during landfall and, it particularly causes the most intense misery, after the storm passes.

The landfall impact area will lose electrical power and combined with a probable non-linear increase in the heat index, has the potential to kill millions if we do not change the trajectory of a mass extinction event and to prevent an increase of 4C temperature rise above preindustrial levels.

Many regions of the world have already passed the 2C marker which the Paris climate accords state would be catastrophic.

This great animation from @RARohde shows long-term weather stations that logged a daily, monthly or all-time record high temperature from 1 May to 31 July

Loughborough University in a presser writes on a new study that has found that the possibility of another major mortality from heat largely due to loss of electrical power, such as the 2017 storms that flattened large swaths of the northern Caribbean, the most destructive being Hurricane Maria, when power was lost for many months.

The team found that the tropical cyclone-heat hazard is already possible along some of the world's most densely populated coastlines in our current climate, but only an estimated 1,000 people have been affected over the last 30 years and mainly in remote northwest Australia.

However, their results revealed that the probability of the tropical cyclone-heat hazard will increase rapidly as the climate warms.

This is because relatively small changes in the earth’s average temperature lead to large increases in the frequency of dangerous humid heat in areas relatively close to the equator, where tropical cyclones occur.

If the climate warms further, the rise in humid heat means potentially deadly heatwaves are more likely to occur in these locations in late summer – the time when tropical cyclones are most likely to strike.

“Although a tropical cyclone–heat event has not yet impacted a heavily populated coastline, the likelihood is growing, and it is down to luck that more people haven’t been affected so far.