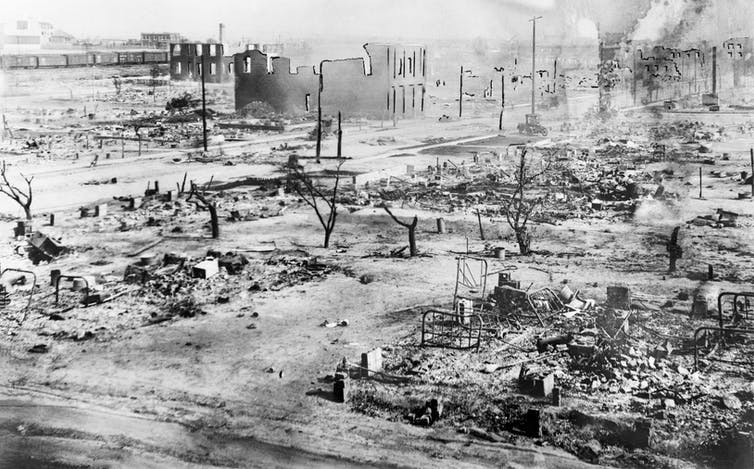 Oklahoma’s right-wing politicians would like to erase history because that’s what they do, whether it’s the omission of facts or rewriting them to favor those in power. Historical guilt and its associated media effects cooties can’t be part of public school curricula.

H.B. 1775  implies that the past prior to 1776 represented by projects like the 1619 project might cause psychic pain or something, something, even though it’s clearly about censorship. It implicates the obvious divisions in a state which wants to unlearn accountability, whose most recent example happened as the previous guy conducted a superspreader event there during the 2020 election campaign.

The law is aimed at eradicating the supposed scourge of critical race theory (CRT) from state classrooms and campuses, a cause that has become a right-wing talking point over the course of the past few months. Oklahoma educators and academics have denounced the law, noting that it will deter teachers from discussing Oklahoma’s fraught racial past of Native American dispossession, lynching and racial terror.

For example, as we mark the centennial of the Tulsa Race Massacre in late May, state political leaders are making it clear that they would like Oklahomans to leave the past behind. In 2001, a state commission report called for reparations and public recognition of the legacy of the massacre. But this new law undermines efforts to reckon with our collective past, and it will chill classroom discussions of this history. H.B. 1775 instructs educators to emphasize that although the perpetrators of the Tulsa Race Massacre did bad things, their actions do not shape the world we live in — even though White rioters murdered scores of Black Tulsans and destroyed more than 1,200 buildings in the Black Greenwood neighborhood, annihilating decades of accumulated Black wealth.

Many educators and academics in the state argue that CRT is essential to helping Oklahomans understand our past. But the law also distorts the meaning of CRT. The theory has its roots in the 1960s, which witnessed the end of openly segregationist politics on the national stage, the passage of landmark anti-discrimination laws and Supreme Court decisions that enforced these laws. Amid these legal, social and political transformations of the 1960s, scholars sought to explain the continuing significance of race in a nation that had eliminated formal racial segregation.

CRT shows us how the language of “disruption” can aggravate racial disparities. Disruptive students forfeit their First Amendment rights. But racialized ideas of order and disorder shape who is deemed disruptive. Indeed, they always have, as Black student protesters learned in the early 1970s in places such as Columbus. Just this month in Ardmore, Okla., a school administrator forbade two Black children from wearing Black Lives Matter T-shirts to school, claiming that the mere mention of the movement was disruptive.

In short, CRT can help inform educators’ understandings of the subjects they teach and of how school policies can disproportionately harm students of color. The true cost of abolishing CRT in schools will be making the pursuit of racial justice in Oklahoma schools that much harder to achieve.

1. No teacher, administrator or other employee of a school district, charter school or virtual charter school shall require or make part of a course the following concepts:

b. an individual, by virtue of his or her race or sex, is inherently racist, sexist or oppressive, whether consciously or unconsciously,

c. an individual should be discriminated against or receive adverse treatment solely or partly because of his or her race or sex,

d. members of one race or sex cannot and should not attempt to treat others without respect to race or sex,

e. an individual’s moral character is necessarily determined by his or her race or sex,

f. an individual, by virtue of his or her race or sex, bears responsibility for actions committed in the past by other members of the same race or sex

g. any individual should feel discomfort, guilt, anguish or any other form of psychological distress on account of his or her race or sex, or

h. meritocracy or traits such as a hard work ethic are racist or sexist or were created by members of a particular race to oppress members of another race.

How many of you were taught about the Tulsa Race Massacre in school?
I wasn’t #AmericanHistory https://t.co/WyJJI80mrc

I learned of this when trump scheduled an indoor rally in Tulsa on the anniversary of this travesty. It was never a coincidence.