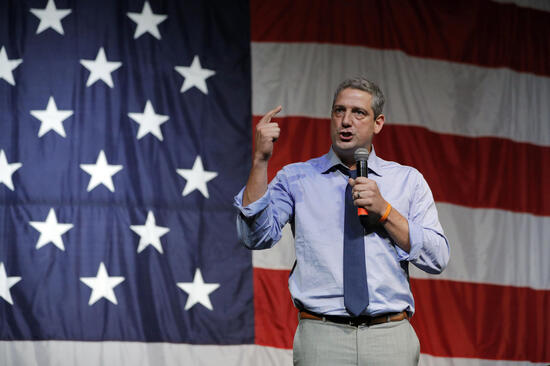 Mandel said he decided to run for the open Ohio Senate seat after watching former President Trump’s second impeachment trial, which he called a “sham” that makes his “blood boil.”

But here’s the reality: This is Josh’s third time running for the Senate in the last 10 years. He ran against Sherrod twice — in 2012 and again in 2018. And every time, he had shady, well-funded special interests propping up his campaign.

Mandel says he’s running to bring Trump’s anti-worker agenda back to Washington. We can’t let him succeed. Chip in before midnight on Sunday to help reach our emergency goal of 2,022 small-dollar contributions »

There’s no question about it — Mandel is wrong for Ohio:

Mandel is no stranger to deep-pocketed special interests, so make no mistake — the 2022 race in Ohio is going to be extremely competitive and extremely expensive.

The Democratic nominee is going to need the full strength of our grassroots movement to beat Mandel again. If you can, chip in now to help us reach our goal of 2,022 small-dollar contributions before the mid-quarter deadline.

Click here to donate to make sure the eventual Democratic nominee is ready for the general election.

His radical, right-wing beliefs are exactly what Ohio doesn’t need in the Senate this fall. But with dark money donors behind him, we need to be able to fight fire with fire. Will you chip in now to help turn Ohio blue?

You might’ve heard the name Josh Mandel before. That’s because this isn’t his first rodeo. This is his third time running for Senate. He's failed twice before, we've got to make sure he fails again.

Josh Mandel is a threat to Ohioans. His career is riddled with fraud and shame.

While Ohio's treasurer, he spent over $1.8 million of taxpayer dollars on what amounted to a political commercial against Sherrod Brown. On top of this, Mandel tweeted his open support for alt-right conspiracy theorists. He's anti-worker, shady, and too extreme for Ohio.

Right now, Josh Mandel is sitting on over $4 million he's collected from right-wing special interests. We can’t afford to let this seat fall into the hands of a right-wing extremist.

Tim believes we need more champions for working people in the U.S. Senate. That's why he's weighing a run. Will you chip in now to stand with Tim in the fight for a blue Ohio?

(32700)
$348.00 (as of May 15, 2022 23:29 GMT -04:00 - More infoProduct prices and availability are accurate as of the date/time indicated and are subject to change. Any price and availability information displayed on [relevant Amazon Site(s), as applicable] at the time of purchase will apply to the purchase of this product.)