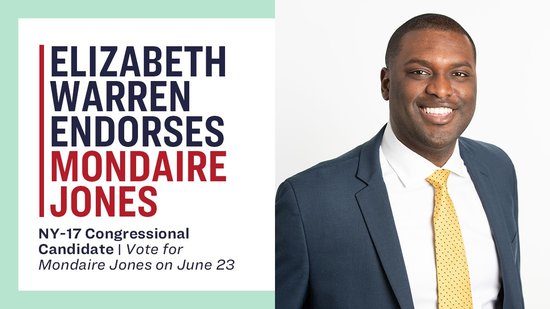 Received this e-mail from the Progressive Change Campaign Committee:

We're thrilled today to introduce our next round of congressional endorsements. No matter what happens with the presidential primary, we can't stop building power in Congress. (And I know everyone is thinking about Iowa right now, but some of these elections are coming up fast, so they need our support now.)

Check out these five great candidates below, and please chip in what you can to their races:

Mondaire Jones (NY-17): Mondaire was born in his district, and raised in Section 8 housing by a single mom who worked multiple jobs. He earned a Stanford BA, worked at the Department of Justice, graduated from Harvard Law School, founded a nonprofit, and then returned home to work as an attorney in Westchester County. He’s running on a platform that includes Medicare for All, universal child care, student debt forgiveness, and the Green New Deal. He’s endorsed by Democracy for America, Collective PAC, the Victory Fund — and Elizabeth Warren! He's running in a crowded primary for an open blue seat (the previous Democrat, Rep. Nita Lowey, decided to retire.) The primary is June 23. Chip in $3 to Mondaire here.

Georgette Gómez (CA-53): Georgette is a first generation American, the daughter of immigrants. As she says, she had “the privilege of documents” and her parents did not, and as a result, she saw how much they struggled against the system. She spent a decade as a community organizer working on environmental justice, land use decisions and the impacts of heavy industry, and then became the first queer Latina member of the San Diego city council, where she chairs the transit system and put forward a resolution against the border wall. She is endorsed by the California Democratic Party, the California Federation of Teachers, SEIU, and UNITE HERE. She's running in a primary for an open blue seat (the previous Democrat, Rep. Susan Davis, is also retiring). The primary is March 3. Chip in $3 to Georgette here.

Mike Siegel (TX-10): Mike is a former union organizer, public school teacher, and an Austin city attorney who took on Texas Republicans to demand gun reforms. As a civil rights lawyer he also sued employers on behalf of women who experienced discrimination in the workplace and whistleblowers who suffered retaliation. Mike is endorsed by local and national unions, and by the Sunrise Movement for his commitment to the Green New Deal. Mike is running in a competitive primary to take on Republican incumbent Michael McCaul. Mike is the only one who can finish the job and flip this district. (Mike nearly beat McCaul last cycle — with no institutional support.) Now, he needs your help. The primary is March 3. Chip in $3 to Mike here.

Candace Valenzuela (TX-24): Candace grew up in a military family that struggled financially, and for a time, they were homeless. She went on to become an educator, and then was the first Latina and African-American woman elected to her local school board. Candace is endorsed by Elizabeth Warren! One of our training alums, she’s running in a primary in TX-24, one of the most flippable races in the country in 2020 to take on Republican incumbent Kenny Marchant. The primary is March 3. Chip in $3 to Candace here.

Jon Hoadley (MI-06): Jon is running against Fred Upton, former chair of the Energy Committee and one of the worst Republicans on climate. Jon is one of the few openly gay members of the Michigan state legislature and has been a champion for progressive issues throughout his career. He supports Medicare for All, expanding Social Security, and the Green New Deal. Chip in $3 to Jon here.

We take seriously the endorsements that we make. We've vetted each of these campaigns with questionnaires and interviews.

We've seen with our own eyes what a difference it's made in Congress over the last few years, as progressive superstars like Katie Porter, Deb Haaland, and Andy Levin have lead the way pushing the Democratic caucus to be tougher and better on climate, financial regulation and oversight over Trump. It's working. Let's keep growing their numbers.

Thanks for being a bold progressive,

Click here to donate to these five progressives campaigns.

(51509)
$17.62 (as of May 19, 2022 04:31 GMT -04:00 - More infoProduct prices and availability are accurate as of the date/time indicated and are subject to change. Any price and availability information displayed on [relevant Amazon Site(s), as applicable] at the time of purchase will apply to the purchase of this product.)