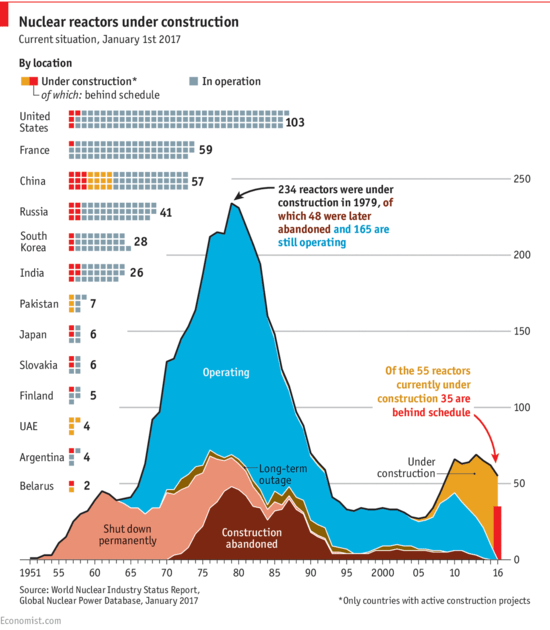 Barring the early period of “too cheap to meter” optimism, nuclear power has consistently been more popular on K-Street than Wall Street.

Curiously among political topics, nuclear power has its staunch ideologues on both the left and the right. Yet the place where it lacks support is perhaps where it needs it the most: investors. While debates about nuclear power tend to focus on side topics such as fuel supply, waste handling, and reactor safety, the industry lives or dies based on economics — and the modern history of the industry has been one of “dying”, despite desperate attempts by governments to prop it up.

In the above graph, one can see the early period of boundless optimism which collapsed amid a mire of ever-growing price estimates.  The second wave — the so-called “nuclear renaissance”, pushed by nuclear companies and extensively promoted by nuclear advocates — has involved even more spectacular collapses amid ever-growing schedules and cost overruns, of catastrophic proportions.  Just a couple examples:

The Hinkley Point C reactor in the UK is the most expensive structure on the surface of the Earth (only the International Space Station is more expensive).  At $26B estimated final construction cost, it’s double the cost of building and running the Large Hadron Collider and paying its veritable army of scientists, from inception up through the finding of the Higgs Boson. Over the course of its construction, the estimated cost of electricity from Hinkley Point C has tripled. The UK National Audit Office estimates that over the lifespan of the plant, ratepayers will have to pay $50B over the market price of electricity due to Hinkley Point C.

The license application for the Olkiluoto Reactor Unit 3 in Finland (an expansion to the existing plant) was made in 2000, with a planned start of service in 2010, for a cost of $3,5B.  The current schedule (which still could slip) is for service to start in 2020, and estimated costs have now risen to $9B. Two decades from license application to entering service. As Wikipedia kindly sums up:

The delays have been due to various problems with planning, supervision, and workmanship,[6] and have been the subject of an inquiry by STUK, the Finnish nuclear safety regulator.[51] The first problems that surfaced were irregularities in the foundation concrete, and caused a delay of months. Later, it was found that subcontractors had provided heavy forgings that were not up to project standards and which had to be re-cast. An apparent problem constructing the reactor's unique double-containment structure also caused delays, as the welders had not been given proper instructions.[51]

In 2009, professor Stephen Thomas wrote, “Olkiluoto has become an example of all that can go wrong in economic terms with new reactors,” and that Areva and the TVO “are in bitter dispute over who will bear the cost overruns and there is a real risk now that the utility will default.”[57]

Olkiluoto 3 was supposed to be the first reactor of 3+ generation which would pave the way for a new wave of identical reactors across Europe, safe, affordable, and delivered on time. The delays and cost overruns have had knock-on effects in other countries.[52]

I boldfaced that line for a reason.  The history of nuclear reaction construction, and especially modern reactor construction, has been one of extreme cost (passed on to ratepayers), and frequent overruns to even that.  To counter this, nuclear advocates generally point to France.  “Look,” they say, “France gets most of their power from nuclear energy! It can be done!”

When one points at the past — particularly, France’s nuclear over-construction in the 1970s (which has hindered the deployment of renewables in France and encouraged overconsumption ever since), it’s important to realize a few things:

The reasons for the negative learning curve are many, but include new discoveries of risks that need to be addressed, ever-growing decommissioning cost estimates, increasing operations costs estimates, and so forth. These issues tend to be fundamental to the design of a given reactor, and require a new reactor generation to solve them.  But with the launch of a new generation, the learning curve for that generation starts over again. Since the lead times on nuclear reactors are so great, and there are so few total reactors built, iterating to get rid of problems is an exceedingly slow process.

As of last year, globally, solar, wind, and hydro cost roughly 40% per MWh that which nuclear costs.  But the price of wind, and especially solar, have been falling rapidly, while the cost of nuclear has been steady or growing. To put it quite simply, nuclear power is expensive with very long lead times, while solar and wind are cheap with short lead times.

Arguments for the necessity of nuclear often revolve around “argument through incredulity”.  You’ll see some nuclear advocate calculate how many solar panels or wind turbines you’d need to produce to generate some given amount of power, and then, “Gee, that sounds like a lot doesn’t it?  Surely you can’t actually achieve that.  Better stick to nuclear!”  The problem with these arguments is that the difficulty of producing and installing said solar and wind power is included in their nominal costs.  And you can build new factories for churning out solar and wind farms faster and cheaper than you can nuclear power plants.

The other primary argument is that wind and solar are intermittent, so you need nuclear power as baseload.  But the problem is that if there’s anything ill-suited for supplementing solar and wind, it’s nuclear!

The above is a typical graph of the daily power consumption in a grid with no wind or solar power. Note the key aspect of nuclear: it varies little with demand. This is a fundamental requirement of nuclear power generation: its already terrible economics is based on it having a >90% capacity factor (e.g. almost always on at full power).  If you want to reduce it to gap-filling at, say, a 30% capacity factor, then you’re tripling its already high costs.  This is simply untenable. Furthermore, most nuclear reactors are physically incapable of responding so quickly to changes in generation and demand.

Intermittency is not something that was introduced to our grid by wind and solar.  Even beyond power plant outages (both scheduled and unscheduled), we’ve always been saddled with the flipside of the coin: demand intermittency. The greater the degree of intermittency, the more one needs to do to address it, but there is no shortage of ways it can be — and is — addressed.

In the first case, peaking is generally done with either hydroelectricity or natural gas.

Peaking can also however be done with other sources, such as biomass, or fuels generated with surplus power during periods of excess.

In the case of storage, there’s a variety of options:

Some plants, such as conventional hydro, automatically contain energy storage.

As for “different kinds of intermittency”, solar peaks around the middle of the day, while wind tends to be strongest at sunrise and sunset.  Solar peaks during the summer (corresponding with peak air conditioning needs), while wind peaks vary geographically, but are often lowest in the summer.  Combining different types of generation reduces the net intermittency and storage / peaking needs. Additionally, some types of wind / solar generation are inherently less intermittent than others (solar thermal, offshore wind, high altitude wind, etc).

Lastly, geographic distribution greatly decreases intermittency, while simultaneously allowing for timeshifting of consumption (e.g. it may be sunset where you are, but it’s still bright further west; etc). A cloud may move over a solar plant or the wind may stop blowing at a solar farm in a particular location, but not everywhere simultaneously.  Likewise, average weather patterns can vary geographically:

Power can be transported for long distances with minimal losses at low incremental cost via HVDC (and to a lesser extent HVAC), a rapidly growing technology. For example, China now extensively uses it to bring power from its energy-rich interior to its densely-populated coasts:

HVDC does not replace local grids. While the lines are quite cheap relative to how much power they carry vs. how far they carry it, HVDC requires large stations that convert between AC and HVDC. However, a side benefit is that HVDC allows power to be shared between disjoint AC grids and helps provide frequency support for them. In short, it — like batteries — tends to stabilize grids and increase their reliability, with or without renewables in the mix.

To sum up some key points:

Debate among yourselves issues of safety and fuel supply. But without an economic case, nuclear power has no future as a major part of the grid.

(51672)
$17.62 (as of May 22, 2022 07:43 GMT -04:00 - More infoProduct prices and availability are accurate as of the date/time indicated and are subject to change. Any price and availability information displayed on [relevant Amazon Site(s), as applicable] at the time of purchase will apply to the purchase of this product.)