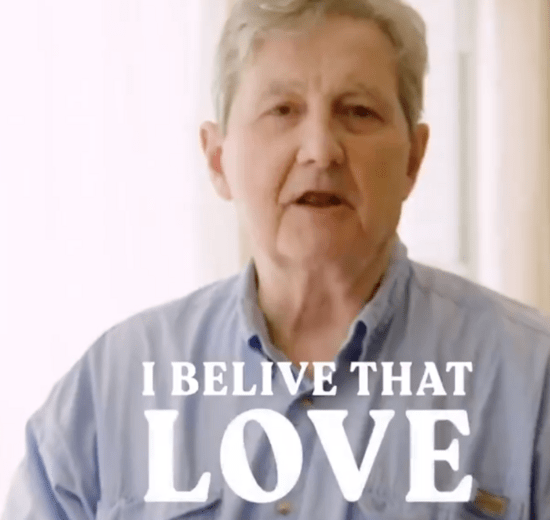 Louisiana Sen. John Kennedy, who sounds like Mr. Haney and looks like Arnold Ziffel, shot a video that made the NRA—which is dissolving faster than an Adderall suppository in the pulpy crevasses of Donald John Trump’s bottomless backside—bray about “triggering” the libs.

All this triggered was my gag reflex, but nice try, slowly dying husk of a once-formidable lobbying juggernaut.

Grab your air-sickness bags, unless you happen to like this sort of thing:

KENNEDY: “Folks, I believe that love is the answer, but you oughta own a handgun just in case.”

2) Are we really supposed to think this guy is a brave, stalwart American because he purchased a widely available item and rubbed it with a dishrag? It would be exactly as manly if I bought a Pez dispenser and taped myself eating Pez from it. These are easy videos to film. I don’t quite get what they’re supposed to prove, though.

Anyway, somehow I got through that whole video without being “triggered.” Better luck next time, NRA. Assuming there is a next time, that is.

It made comedian Sarah Silverman say “THIS IS FUCKING BRILLIANT” and prompted author Stephen King to shout “Pulitzer Prize!!!” (on Twitter, that is). What is it? The viral letter that launched four hilarious Trump-trolling books. Get them all, including the finale, Goodbye, Asshat: 101 Farewell Letters to Donald Trump, at this link. Just $12.96 for the pack of 4! Or if you prefer a test drive, you can download the epilogue to Goodbye, Asshat for the low, low price of FREE.