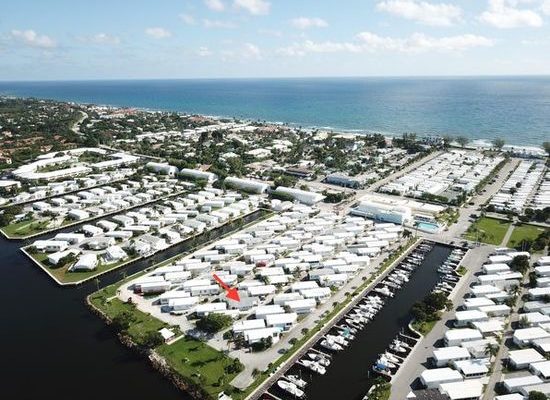 A trailer park could be the site of the IMPOTUS presidential library.

It could OTOH, be another real estate grift that could be separate from the plan to put the Trump Tomb at Bedminister NJ near his golf course.

Not unlike his proposal to move Seoul, Korea away from the border with North Korea, moving the existing residents at Briny Breezes Florida should be easier. And the Trump Library site could be literally and figuratively under water eventually. Trump’s change of residence now makes him a potential favorite son.

A Palm Beach County trailer park could be the site of a future Donald J. Trump presidential library – and the pitch may be made by Vanilla Ice, a close friend of Donald Trump Jr. https://t.co/9KN4PmZ4AJ

BRINY BREEZES — A Palm Beach County trailer park could be the site of a future Donald J. Trump presidential library.

That’s the vision of James Arena, a real estate broker and resident of Briny Breezes, the 43-acre coastal town just south of Boynton Beach that’s made up entirely of a mobile home park.

Arena, an avid Trump supporter, says he thinks he can convince the president to buy the land and turn it into a personal monument. Arena said he has the ball rolling by reaching out to his friend, rapper and Palm Beach County resident Vanilla Ice, who is close to the Trump family.

“Vanilla Ice ran it by Donald Jr.,” Arena said of the president’s eldest son. “He called me back and said, ‘Man, I think they’re really into it.’”

www.palmbeachpost.com/…
Briny Breezes has now made a list of the lewdest-sounding town names in the United States,
x

After saying, “I’m so busy,” twice Trump said, “I know a lot of people mentioned it to me, the presidential library.” Todd next asked if Trump knew where he’d want the library.

Then, the man who markets everything from his name to bogus for-profit colleges to steaks, went into money making mode and answered, “I have a lot of locations actually. The nice part, I don’t have to worry about buying a location.”

Even with Mar-a-Lago being promoted using taxpayer dollars and accusations of profiteering from his inauguration, just to name a few unsavory ways Trump and his family have attempted to make some side cash since his election, Chuck Todd was somehow surprised by the president’s response, saying, “I have to say, I didn’t see the idea of his library on one of his properties coming with that answer.”

Trump is taking another two week golf vacation Ã¢Â€Â” as the taxpayer bill for his hobby sets records https://t.co/Al0YMesoLJ

(51617)
$17.62 (as of May 20, 2022 09:29 GMT -04:00 - More infoProduct prices and availability are accurate as of the date/time indicated and are subject to change. Any price and availability information displayed on [relevant Amazon Site(s), as applicable] at the time of purchase will apply to the purchase of this product.)