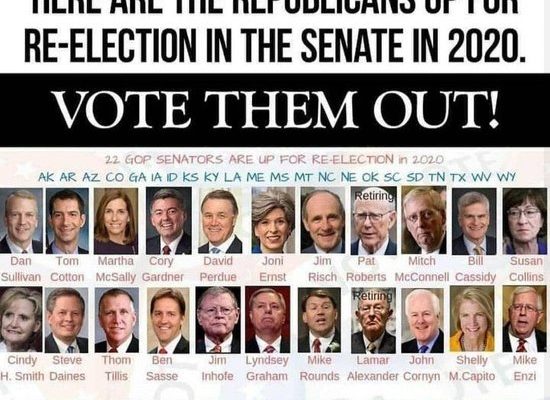 The Johnson impeachment was disastrous for GOP senators. Will history repeat itself, or will there be much more complex purges including revenge against Mitt Romney, John Bolton, and others. Because Trump is all about the… abuse of power.

“But history does not look kindly on politicians who cannot fathom a fate worse than losing an upcoming election. They might claim fealty to their cause — those tax cuts — but often it’s a simple attachment to power that keeps them captured by fear.” https://t.co/Nw4wW8v2lx

The first tweet post-acquittal was a declaration of president-for-life.

And here we go. The Mad King thinks he's a monarch who can hand down the Presidency in perpetuity. https://t.co/rVpt4T1tDx

Congratulations, Republicans. By refusing to hold Trump accountable for his crimes you’re enabling a lawless, out-of-control, petty, vindictive man who intends to use DOJ to conduct politically motivated prosecutions of his enemies. You’re doing nothing but feeding the monster. https://t.co/8st25Jps6M

Trump is compiling a post-impeachment enemies list and Bolton is at the top of it. Trump had told people he wants Bolton criminally prosecuted. My latest:https://t.co/p7ZjjszDhP

Whatever else comes of the 2020 campaign, it will always have a place in history as The One After Donald Trump Blew It All Up. So, we asked a group of top political thinkers: where does that leave us now? https://t.co/bamCFbkwxM

"The acquittal is a statement of values by the Senate—an embrace of certain basic propositions about the president’s conduct, the House’s conduct in impeaching him, and its own responsibilities," @benjaminwittes and @qjurecic write: https://t.co/KA75VjJSfg

.@mkraju: Why is it OK for the president to ask another foreign country to investigate a political rival?

MCCONNELL: What I’m here to talk about today is the political impact of this. We’ve completed it, we’ve listened to the arguments, we voted, it’s in the rearview mirror. pic.twitter.com/HJ5YJZx0Y0

The most important question now that Trump has been acquitted is . . . what foreign leader will he be contacting tomorrow to urge, bribe or extort interference in the upcoming election?

(22501)
$179.00 (as of May 22, 2022 00:33 GMT -04:00 - More infoProduct prices and availability are accurate as of the date/time indicated and are subject to change. Any price and availability information displayed on [relevant Amazon Site(s), as applicable] at the time of purchase will apply to the purchase of this product.)